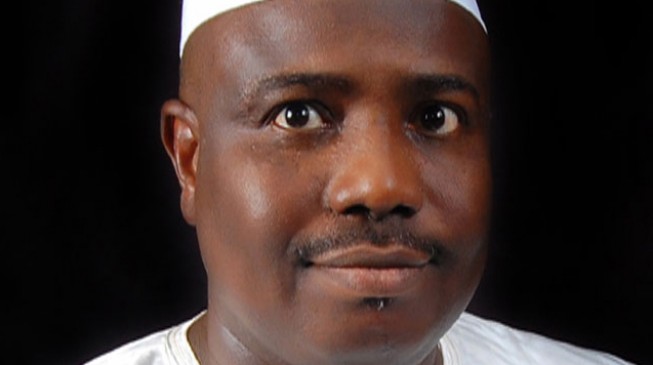 09:55 2014
Print This Article Share it With Friends
👤by Chidi Chima  1 Comment
Advertisement

Speaker of the house of representatives, Rt. Hon. Aminu Waziri Tambuwal, is in a dilemma over his immediate political future, TheCable can report.

He was initially being promoted for the presidential ticket of the All Progressives Congress (APC) ─ although he is technically still in the Peoples Democratic Party (PDP) ─ but the recalibration going on in the opposition party has left him with an uncertain future.

A source in his camp, who refused to be identified “because the picture is still premature”, told TheCable that Tambuwal, who enjoys respect for managing the affairs of the polarised house with maturity, is faced with many options.

“He will definitely defect to APC when certain legal and political hurdles are crossed, but that is just an aspect of the game. He has three options: running for the presidential ticket of APC, going for governorship in Sokoto State and returning to the house. No decision has been taken yet,” she said.

TheCable learnt that increasingly, there is pressure on him from national assembly members from Sokoto to run for governorship.

“The reps and senators from Sokoto State are trying to persuade him to go for governorship. Sokoto is an APC state and he enjoys a great relationship with the current governor, Alhaji Aliyu Wamakko,” another associate of the speaker said ─ while not ruling out the possibility of a shot at the presidential ticket.

The complication with Tambuwal’s presidential hopes is linked to the increasing belief in the APC that Gen. Muhammadu Buhari is the most viable candidate against President Goodluck Jonathan in the February 14, 2015 poll.

Alhaji Atiku Abubakar is also a strong contender for APC’s ticket, while other names being mentioned include Governor Rabiu Musa Kwankwaso of Kano State and Senator Bukola Saraki, former governor of Kwara State.

However, the gravitation towards Buhari has left hopefuls like Malam Nuhu Ribadu in a difficult situation, with senior party leaders advising the former chairman of the Economic and Financial Crimes Commission (EFCC) to go for governorship in Adamawa State following the impeachment of Murtala Nyako.

Tambuwal, who initially enjoyed the backing of Asiwaju Bola Tinubu in the presidential calculations, is also facing the prospect of being advised to shelve his ambition for Buhari so that the party can confront PDP in full strength.

If Tambuwal is able to secure the governorship of Sokoto State, according to calculations within his own camp, he could be in a better and stronger position to challenge for presidency in 2019 ─ in the event that APC does not win next year.

The least attractive “and the most delicate” option, according to the associate who spoke with TheCable, is returning to the house of representatives in 2015 and continuing as speaker ─ as Senate President David Mark did in 2011.

“If PDP ends up controlling majority in the house, Tambuwal would not be able to return as speaker,” she said.

When TheCable asked Tambuwal’s spokesman, Malam Imam Imam, to comment on these developments, he said: “We have been hearing all these stories too. I think the speaker will let the world know where he is going when the time is ripe.”

Tambuwal, 48, was elected speaker in 2011 in spite of his party zoning the position to the south-west. He won with the help of opposition parties and PDP members who refused to toe the party line.

He has since identified more with the opposition and has been tellingly absent from PDP activities that tend to promote Jonathan ─ the most recent being his absence from the meeting of the PDP reps with the president where the caucus said they had endorsed Jonathan for a second term.

TWITTER @thecableng
Copyright 2020 TheCable. All rights reserved. This material, and other digital content on this website, may not be reproduced, published, broadcast, rewritten or redistributed in whole or in part without prior express written permission from TheCable.
Tags
aliyu wamakkoaminu waziri tambuwalBola TinubuMuhammadu Buharinuhu ribaduPACPDPSokoto
Advertisement