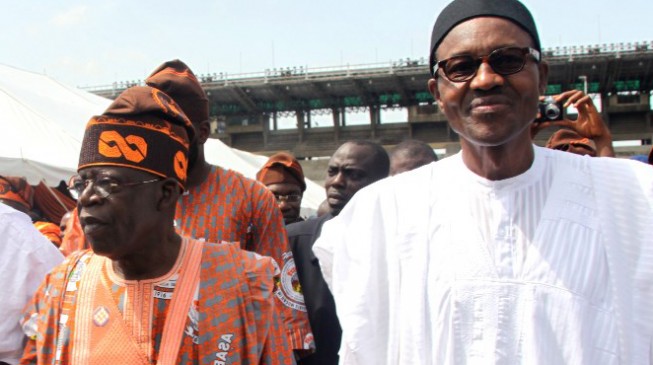 07:45 2014
Print This Article Share it With Friends
👤by Sodiq Yusuff  9 Comments
Advertisement

Former governor of Lagos State, Asiwaju Bola Ahmed Tinubu, has dropped his interest in the vice-presidential slot of the All Progressives Congress (APC) in the 2015 presidential election, TheCable understands.

Tinubu is making that “personal sacrifice” in the interest of opposition politics in Nigeria, one of his associates said at the weekend.

There had been strong speculations that Tinubu was planning to be running mate to Gen. Muhammadu Buhari.

The associate said: “Tinubu has seen that the political currents in Nigeria are not in favour of a Muslim-Muslim ticket and there is every chance that the presidential candidate of the APC will be a northern Muslim.

“Picking an all-Muslim ticket will only play into the hands of PDP which has been trying to portray APC as an Islamic party. Whoever emerges as the running mate will have Tinubu’s blessing.

“No matter what, Tinubu has succeeded in negotiating a very good deal for the south-west in the APC. The strongest positions in the national working committee of the party have been zoned away from the south-west, which leaves the zone in a good position to take the vice-presidential slot.

“Tinubu has laboured very hard to build a political base in the south-west and he deserves credit for this. Those who think they can just ride on his back to win votes need to show him a bit of respect.”

TheCable was also informed that some top APC politicians in the south-west were already unhappy with Tinubu because of the VP issue, a situation that has generated tension in the party.

Governor Kayode Fayemi of Ekiti State and two former governors ─ Chief Niyi Adebayo (Ekiti) and Chief Segun Osoba (Ogun) ─ are all believed to be eyeing the VP slot since they are all Christians.

All APC governors in the south-west are Muslims, apart from Fayemi.

APC is most likely to zone its presidential ticket to the north, and a Muslim candidate is expected to be picked at the party’s convention in November.

Outside of the north, the south-west is the biggest terrain for the APC where it currently controls five of the six states.

TWITTER @thecableng
Copyright 2020 TheCable. All rights reserved. This material, and other digital content on this website, may not be reproduced, published, broadcast, rewritten or redistributed in whole or in part without prior express written permission from TheCable.
Tags
APCasiwaju bola tinubuconventionkayode fayeminiyi adebayoPDPsegun osobavp slot
Advertisement