2019: Some politicians who pretend to love Nigeria want to destroy it, says Okogie 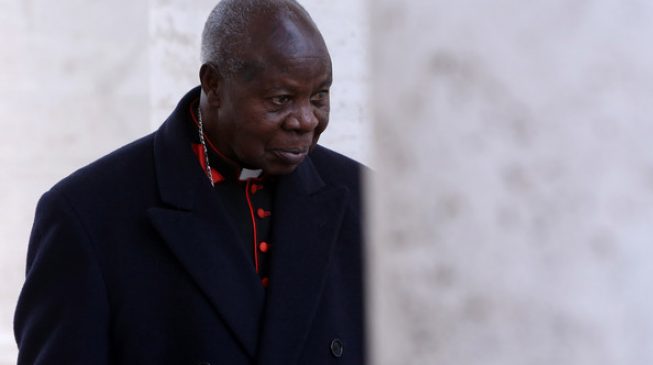 10:04 2018
Print This Article Share it With Friends
👤by Chinedu Asadu  0 Comments
Advertisement

Anthony Okogie, archbishop emeritus of the Catholic archdiocese of Lagos, has warned against plans to destabilise Nigeria ahead of the 2019 elections.

Okogie asked Nigerians to beware of politicians that “pretend to love Nigeria, but are actually plotting her descent into bloody disintegration”.

He wondered why some perpetrators of violence continue to go scot-free and also expressed concern over the increasing illegal importation of arms into the country.

“Approaching another year of elections, this admonition has become frightfully pertinent. For what is being witnessed looks like a re-enactment of Shakespeare’s Julius Caesar,” Okogie said in the statement titled ‘Beware the Ides of March’.

“Nigeria, like Caesar, must beware of the Ides of March. We have been witnessing politically inspired violence by Boko Haram. We have also seen how Nigerians in the states of the middle belt are slaughtered by armed herdsmen.

“While the issues of Boko Haram and murderous herdsmen are yet to be given the attention they deserve, making refugees of some Nigerians on their homeland, we continue to read disturbing news of importation of arms to Nigeria.

“Previous importations have come and gone without any conviction or sanction. We ask, as we have been doing: Who are those importing arms into Nigeria? Are they ghosts? What is government doing about them?

“Why is it that some Nigerians kill other Nigerians with impunity? Why is it that those who masterminded the highly treasonable act of armed invasion of the national assembly are yet to be identified, apprehended and arraigned before the courts? The build-up to the 2019 elections gives the impression that some people are out to destroy Nigeria.”

He asked Nigerians not to vote with ethnic bias but instead, vote out those running the country when the elections come, adding: “This is the time to vote on past records of public service.”

Okogie said: “We must hold every political office holder and contender to an uncompromisingly rigorous standard. This is not the time to vote on ethnic, religious or regional lines.

“Let us not cast our votes for those who have ruined, are ruining and will ruin this country. Nigerians must beware of the Ides of March. We are still watching.”

TWITTER @thecableng
Copyright 2020 TheCable. All rights reserved. This material, and other digital content on this website, may not be reproduced, published, broadcast, rewritten or redistributed in whole or in part without prior express written permission from TheCable.
Tags
2019 electionsAnthony OkogieJusticekillingspoliticians
Advertisement