Land use charge: We will respond positively to your yearnings, says Ambode 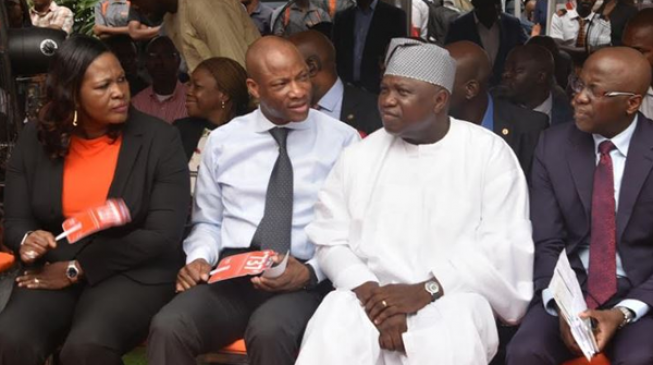 20:33 2018
Print This Article Share it With Friends
👤by Jamilah Nasir  0 Comments
Advertisement

Akinwunmi Ambode, governor of Lagos state, says the ongoing dialogue with various stakeholders on the land use charge will yield a positive result.

He was speaking on the criticisms and complaints that trailed the increase in the land use charge.

In a statement by Habib Aruna, his chief press secretary, Ambode said the increment was all in a bid to protect the future and create permanent prosperity for the state.

He said his administration was very sensitive and responsive to the yearnings of the people, and had been meeting with various stakeholders in the last one week to explain the rationale behind the new law.

“Just the way that you would have observed, we held a session with the business community last week on Lagos Means Business and one of the topical issues that were raised was about the land use charge and during that session, I did say that the state government was opened to dialogue,” Ambode said.

“Ever since that Tuesday, we have been consulting people and we have also been trying to explain the basis of this land use charge law.

“It is not about today, it is about the future and if there is going to be permanent prosperity in Lagos, some things have to be done but I can tell you based on the dialogue and the things we have been receiving, obviously we would respond positively to those yearnings.”

The governor said out of the 300 tax items in the state, only the land use charge and one other law was reviewed upward, and that the development was targeted at fast-tracking development and protecting the future of the state.

He added by the end of the week, the state government will be able to ameliorate the issues raised by stakeholders.

“I want Lagosians to understand one particular issue. We have over 300 tax items for which nothing has been touched apart from this land use charge and maybe one other,” he said.

“But again, we are a very responsive government; we are very sensitive because at the end of the day, governance is about the people; it is about what they want.

“Yes, people might like that infrastructural development is on the progressive chart in Lagos but also it comes with a price. But notwithstanding in the middle of all that, a responsive government will listen to the yearnings of her people.

“So, obviously when I say I want dialogue, I really mean it and I am ready to respond to that.

“We have been talking and we have been making people to understand also and I think by the end of this week, we should be able to come out with something positive that actually ameliorate the issues being raised by concerned stakeholders.

“At the end of the day, it’s all for the development of Lagos. What this government is interested in is to create a trajectory and framework of permanent prosperity for Lagos.”

TWITTER @thecableng
Copyright 2020 TheCable. All rights reserved. This material, and other digital content on this website, may not be reproduced, published, broadcast, rewritten or redistributed in whole or in part without prior express written permission from TheCable.
Tags
Ambodechargelagoslandpositive
Advertisement