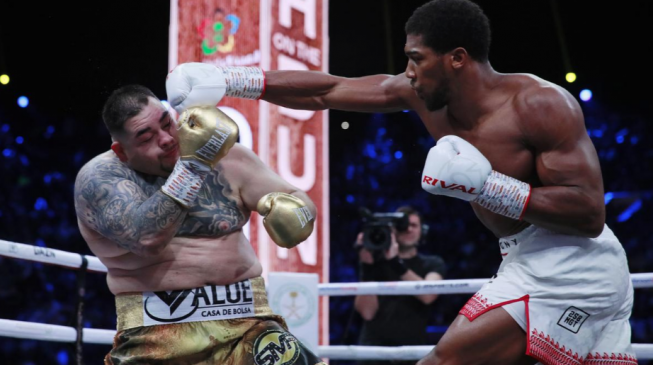 13:59 2019
Print This Article Share it With Friends
👤by Sunday Omeike  0 Comments
Advertisement

Diriyah Arena, Saudi Arabia, was the coming of age for Anthony Oluwafemi Joshua. It was either a win to retrace his steps or a loss to become Samuel Peters 2.0, and what a smart display to reclaim his WBO, IBF, IBO and WBA heavyweight titles.

Looking back at the bout and the preparations that went into it, Anthony Joshua has never looked and acted more Nigerian than he did. A very humble boxer, AJ not only entered the ring with late Fela Anikulapo Kuti’s Water No Get Enemy song, he also looked a model Nigerian eventhough he fights under the British Union Jack.

However his legal country, it was Joshua’s newly discovered street sense that helped him reclaim his titles. A month after losing the titles to Ruiz Jr in the USA, Joshua visited Nigeria for the first time in 17 years and mixed it with residents of Makoko slums in Lagos. The 30-year-old did not only connect with his roots, he also learnt firsthand the daily survival of the floating community against all odds. This was the quality the Shagamu native displayed all night and it was evident in his three major weapons.

Lighter weight: Fitness is key in the streets to survive the everyday hassles, and seeing AJ’s trim body unveiled few days before the bout at the media workout and weigh-in, it was evident that a 12-round survival was on his mind, not a knockout victory. The reduction in weight was phenomenal and in stark contrast to that of his opponent. Joshua shed 10lbs to weigh 237lbs for the fight, his lightest in five years, compared to a heavy Ruiz Jr who added 15lbs and weighed his heaviest in 10 years at 268lbs.

The reduced weight and light frame helped Joshua dance around the ring, evading his opponent while landing blows comfortably. Furthermore, the lighter frame helped him swivel shoulders at lightening speed to dust off shots, and quick feet to evade potential danger. He did float like a butterfly- a la Mohammed Ali- most times. Distance: Keep your opponent at a distance while searching for an opening, and Joshua did to near-perfection. Ruiz Jr is a dangerous opponent, his power punch doing serious damage in their first encounter but Joshua was more streetwise here, keeping his distance all night long and using it to evade Ruiz Jr’s punches.

The Mexican only managed to land five punches of an average 22 he threw per round. He also had a over 20% success rate in only five rounds (Joshua succeeded in 11 of 12 rounds). Joshua also limited Ruiz Jr to less than four successful power punches in eight rounds, enjoying success on his in six rounds. Floyd Mayweather would have been proud of AJ using this signature evasion tactic that brought him fame as the undeafeated and best ever pound-for-pound boxer. Power of the Jab: Joshua packed his most-potent weapon of the night in his left hand, the jab. It worked wonders and evoked memories of Lennox Lewis dismantling Evander Holyfield twice in 1999.

Taller than Ruiz Jr by four inches and with a longer reach, Joshua used his greatest asset of the night to great advantage. He landed 107 punches on the night and 63 were jabs. The left jab, especially, did damage all night, exposing Ruiz Jr to the waiting right- reserved for power punches. The Briton’s reach allowed him the ultimate ingredient required to win- outpunch the opponent. He threw over hundred more punches more (373 to 261) and doubled Ruiz Jr’s jab tally (270 to 131 jabs). Joshua also had a better success rate on total punches (28.7 to 23%), jabs (24.1 to 17.6%) and power punches (40.8 to 28.5%).

These statistics, and Joshua’s all round tactical display showed that the Watford-born boxer’s six months of hell made him a better and wiser boxer, attributes he would need if he eventually gets the chance to to unify the heavyweight division against the powerful punch of Deontay Wilder or the erratic but strong Tyson Fury. Anthony Joshua really did rediscover his legacy from his Nigerian roots where he was inspired to get his belts back.

10 ways to get rid of cockroaches using home remedies