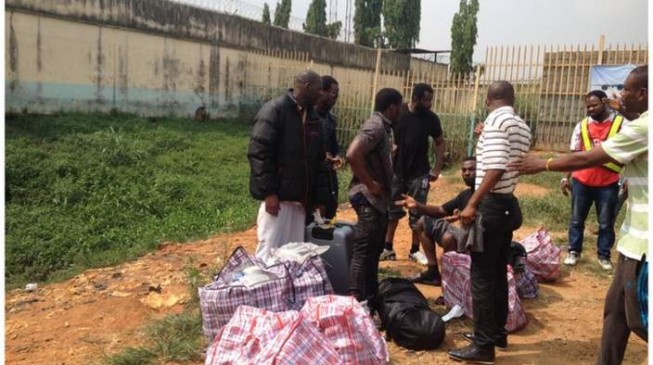 21:29 2017
Print This Article Share it With Friends
👤by Fredrick Nwabufo  0 Comments
Advertisement

About 97 Nigerians have been deported from South Africa for alleged civil and criminal offences.

This is coming a few days after a South African mob attacked Nigerians and their businesses in the country.

The Nigerian government condemned the attacks, and also threatened consequences if they are not checked.

The Nigerian senate has also resolved to send a strong delegation to the country to protest against the attacks.

In the space of a month, about 500 Nigerians have been deported  from different countries.

Last week, 314 Nigerians were forced to return home as a result of harrowing experiences in Libya.

On Monday, 41 Nigerians girls who were trafficked to Mali returned.

The economic situation in the country has made many consider the other option of seeking green pasture abroad.

TWITTER @thecableng
Copyright 2019 TheCable. All rights reserved. This material, and other digital content on this website, may not be reproduced, published, broadcast, rewritten or redistributed in whole or in part without prior express written permission from TheCable.
Tags
deportNigeriansSouth Africa
Advertisement