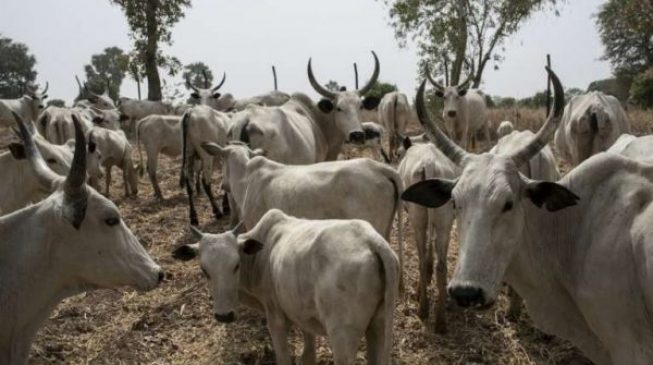 16:47 2019
Print This Article Share it With Friends
👤by News Agency  0 Comments
Advertisement

Samson Aku, a 67-year-old farmer, has been charged to court by the Nigerian police for allegedly killing animals.

The farmer, who resides at Friendship street, SCC road in Bwari, Abuja, was accused of killing some animals which belonged to Idris Wada, a herder.

Wada, the chief prosecution witness, told a Dutse grade I area court in Abuja, on Wednesday, that he lost four cows when Aku attacked his farm.

The witness, who was led by Idowu Ojo, prosecution counsel, said the four cows died from injuries they sustained when the defendant used his cutlass on them.

“I sold two surviving cows at a give away price of N70,000, so that I will loose our completely,” he said.

“I received a call from my son that a farmer who’s farm was close to where he was herding had attacked six of my cows.

”By the time I got there, four cows were dead and the remaining two were dying. I slaughter them immediately and called someone from the meat market to buy the meat.”

During cross-examination, Abubakar Suleiman, the defence counsel, argued that his client was not responsible for the death of the cows since the witness and his son, slaughtered the cows themselves.

He argued that the herder had no evidence since all his allegations were built on the call he received from his son.

The defence counsel said Aku needs to show more evidence to convince the court that the cows were killed by the farmer.

After listening to both sides, Suleiman Mohammed, the presiding judge, adjourned further hearing in the matter till Monday.

On Tuesday, Vice-President Yemi Osinbajo launched the National Livestock Transformation Plan (NLTP) which was developed by states and adopted by the national executive council (NEC) to address the farmer-herder crisis in the country.

TWITTER @thecableng
Copyright 2020 TheCable. All rights reserved. This material, and other digital content on this website, may not be reproduced, published, broadcast, rewritten or redistributed in whole or in part without prior express written permission from TheCable.
Tags
agricultureFarmerherder
Advertisement