Adeboye donates 60% of his income to charity, says US pastor 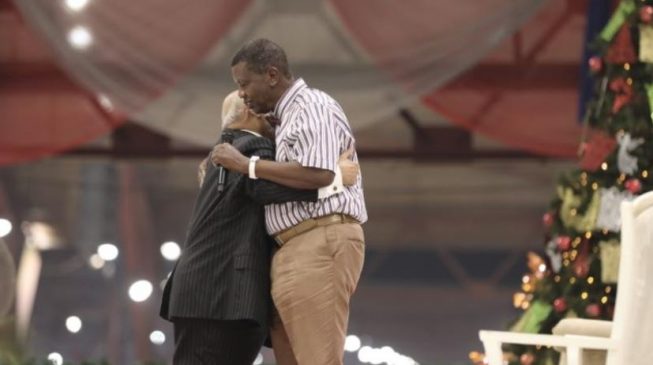 00:01 2019
Print This Article Share it With Friends
👤by Bisi Daniels  0 Comments
Advertisement

Pastor Stephen Rathod, Senior Pastor of The Covenant Family Church, Tulsa, Oklahoma, USA, has known and been associated with Pastor Enoch Adeboye, General Overseer of the Redeemed Christian Church of God and his ministry for over 40 years; long before he became the leader of the church. He held the congregation seated with rapt attention in heavy silence on Thursday, the fourth day of 2019 Annual Holy Ghost Congress of the church at the Redemption Camp.

As a man with Nigerian friends, through one of who he became a Born Again Christian, he was privileged to hostsome of the many Nigerians who went to Tulsa in the 1970s for Camp meetings, which was popular then.

He became the host of an RCCG delegation, led by its founder, Pastor Josiah Akindayomi (1909–1980).

Pastor Rathod played host to them regularly and became a close friend of Pastor Adeboye, and even more.

“I have served for 40 years! I am Daddy GO’s host; I was his bag boy; I picked his bags and put them in his car. I was his driver, his dry cleaner, and his secretary – calling people, setting up meetings, “he said on Thursday night.

Rathod was in the hotel room of Pa Akindayomi in Tulsa, where he solemnly declared that Pastor Adeboye would be his successor.

He was there when the subsequent prayer shook the foundation of the hotel to make its management suspect the occupants were playing some powerful instruments.

The relationship between the two pastors is known to many but when Rathod, an Indian-American pastor, who preaches around the world, said he was going to speak about the Adeboye family, close watchers of Pastor Adeboye wondered how he would take any eulogy.

The surprisingly humble man, in spite of his towering image, believes that all glory should go to God. He looks uncomfortable when he is being praised and a source said during such moments, he transfers the praise to God by praising Him.

Perhaps luckily for him, Pastor Rathod did not use any superlative language.

He spoke mostly about how upholding faith and holiness by Pastor Adeboye has caused the church’s phenomenal growth in Nigeria; and spreadto 198 countries.

He also recalled some of the challenges Pastor Adeboye faced. There was pin-drop silence as Rathod continued to reveal the favourite Daddy of the congregation.

And it got very emotional when he invited one of the children of the Adeboyes to the altar, and said, “In the early 1980s, all the children who hanged around the Camp, they were rich kids. They all schooled in England, but my children stayed at home.

“Every morning when we had family meetings – Mummy GO, Daddy GO, myself and the children, we cried, and prayed.

One could hear some members of the congregation sobbing; some cleaned their wet eyes.

When the cameras picked Pastor Adeboye and his wife, they looked their usual calm, with no trace of emotions on their faces.

Rathod also said the couple donates up to 60 per cent of their income to charity.

Rathod, who held the congregation spellbound with the story of Pastor Adeboye, ended by asking him for prayers.

He laid his right hand on Rathod and prayed:”Father, I pray that You will lay Your Mighty hands on your son, afresh, and anoint him so mightily today.  That he would stand firm on the doctrine of holiness. So that he will finish well, and finish strong.

“And I commit all your children, who are also saying; from now on, it will be holiness or nothing!  As many of them as would genuinely return to this foundation, anoint them afresh.

“And Lord God Almighty, as many as have seen the Fruits of Holiness in The Redeemed Christian Church of God, and who would say; This would be our own doctrine. Father, let it be well with them all.

“Please, Lord, send Help to us; Help us remain strong. Help us to remain Faithful. And let it be well with all of us!

“Your son (Pastor Stephen Rathod) has been with us for Forty (40) years; if you delay your coming for many more years: I pray that together we will keep on preaching the gospel, healing the sick, casting out demons, raising the dead and doing the will of God.

In Jesus’ Mighty Name, we have prayed – Amen!

Some Adeboye watchers noticed a slight quake in his voice when he commenced. Even though Rathod tried to crack some jokes during the presentation but it did little to reduce the tense atmosphere.

There were other guest pastors for the night who were warmly received by the congregation. Big names like Dr Mercy Ezekiel, who spoke and prayed for families; Rev Dr. Feiix Omobude, leader of the Pentecostal Fellowship of Nigeria, prayed for the Church in Nigeria; Prophet S.K. Abiara spoke on evangelism; while Bishop Wale Oke spoke all “All things become new”

All the sermons and presentations at the Congress are transcribed by the Discovery Media Crew.

There were varied music presentations from choirs from other countries and the RCCG Mass Choir.

Amazing miracles were shared by people and response to the altar call was massive.

Keeping to the theme of the Congress, which devoted much time to prayers for turnaround, Pastor Adeboye spoke on the need for praying when he mounted the pulpit to close the day.

And because God owns the world, He owns all because he made all and controls all: Heaven is His throne and the earth His footstool.

All those are reasons, he said we need to go to Him always through prayers.

But he explained that prayers are in categories:

“There is casual prayer; the kind of prayer we pray when we are tired or when we are in a hurry.

“There is regular prayer, called the Lord’s prayer in Mathew 6: 6-13. That is the prayer most Christians pray.

“Desperate prayer is the one used by people in desperate need for help.It doesn’t follow protocol; it is urgent and intense.

It is the kind of prayer Peter prayed when he was sinking during his walk on water to meet Jesus. He just shouted, “Lord help!”

It is the kind of prayer Jacob prayed until he wrestled with a spiritual being.

“Desperate prayer is forceful, violent and it is answered quickly.

Jesus was leaving Jericho when He heard Blind Bartimaeus’ Desperate Prayer, and He “stood still”

“Paul and Silas prayed it in prison and there was an earthquake.”

He gave his own example of how he prayed it at the Redemption Camp years ago to tell God he didn’t want to be an ordinary pastor, which caused an earth tremor that was felt in some other parts of Ogun State.

“In those days, nobody lived at the Redemption Camp. I am sure some of the elders of the church would remember when one day an antelope bumped into our Ministers’ Conference. Poor animal, it ended up in the stomach of some people.

Early in the morning every Tuesday, I would leave our house in Mushin for the Camp and be there until Thursday morning when I went to the Headquarters for Faith Clinic. The only other people in the Camp then were the carpenters who were working, and they would stop as soon as it is dark and retire for the day.

But I wanted to seek Him; I wanted to be alone; with no noise and nothing to distract me. One night – I remember that night like yesterday – I prayed: “Father, I surrender all; it is only you now; that is all I want. I don’t want to be an ordinary pastor. Please, I am not seeking anything else. Not seeking for gold, not seeking for clothes, not seeking for fame; I want you to empower me so I can do this work. And if you are not going to do it, take me away.”

That day, He answered, and there was a tremor in the Camp. The tremor went as far as Ijebu Ode where pictures that hung on the wall were dropping.

When you seek God with all your heart; when you seek Him in desperation, you will find Him.”