Adeboye: What my experience in the throne room taught me about holiness 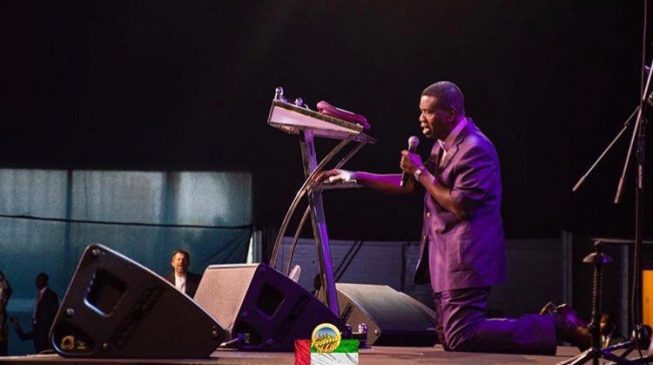 16:16 2019
Print This Article Share it With Friends
👤by Bisi Daniels  0 Comments
Advertisement

The General Overseer of the Redeemed Christian Church of God (RCCG), Pastor Enoch Adeboye, has revealed how an experience in the throne room of heaven informed his emphasis on holiness in his ministry.

Adeboye narrated his experience during a recent mission in Dubai, the United Arab Emirates, for a ‘Festival of Life’, the overseas version of the church’s Holy Ghost Service.

During the service at the Festival Arena, Festival City, Dubai, the hall broke its seams with over a thousand worshippers in the overflow. They were so many the General Overseer had to assure them all of their share of the blessing. “I have been asked to let those of you in the overflow know that there are about a thousand of you but every blessing going on here will reach you there too,” he said.

Earlier in one of the many engagements he and his team had, he explained how he was transported to heaven in a vision that changed his attitude about holiness in 1976.

“We went to a conference of Pentecostals in Kenya. All the big names in Pentecostalism gathered in Kenya. I wasn’t invited, but I got the information, and I went because I was hungry for God,” he said.

“So, I was there. Towards the end, we had a closing programme called meditation. Somebody was playing the guitar, singing songs and the rest of us were praying in the spirit. It was an awesome period. I was praying, and all of a sudden, I was transported to heaven.

“I was an open vision as they would call it because I wasn’t sleeping. I found myself in a huge room like a dome, very huge. There was someone far away, sitting on the throne. Very far away; very difficult to describe.

“There were angels on both sides: on my right were angels; huge things. Millions of them on my right, millions of them on my left. And they are not white, it’s just that there are no words to describe them. The closest I can get to describing them is when you put clear water in crystal glass. We don’t have the word for describing that type of colour.

“It was like I was rooted to a spot. When I turned to the right, the angels moved back; when I turn to the left, the angels moved back. And I saw someone far away on the throne there. Nobody said a word. All of a sudden, it occurred to me to take a look at myself. And I saw myself naked; completely naked, covered with all kinds of rubbish as if you have just pulled out somebody out of the sewage system.

“With that, I understood why the angels were moving away. Nobody said a word, and suddenly the vision vanished. And I said to the Almighty God when I would be returning to that throne room; I wouldn’t come dirty.

“That is the reason I preach about holiness in all my sermons.”

So ingrained in him was the need for holiness that in the early years of his leadership of the church, he outrightly rejected advice to dump holiness and righteousness for prosperity messages. He shared the story in one of his testimonies.

“Years back, a friend came to me and alleged that instead of the church growing, we were going around in circles. He advised that I change the theme of my preaching. He said, ‘Everybody is talking about prosperity and other sweet things, but you keep hammering on holiness. Change and go the way the world is going.’

“But I said, no. I’m sure I got to where I am because I’m committed to a God who is holy. You wait and see, sooner or later, the balloon will burst, and those who want to go to heaven will come because they will look and say this fellow has remained steadfast. This is what he was preaching at the beginning; this is what he is still teaching now. He must know something that others don’t know.

“If you do your business the way it has to be done, the Divine Partner will play His part. Things might be slow to start with, but it will pick up. There were times when my wife and I couldn’t go to Lagos from the Redemption Camp because we didn’t have money to pay the toll gate fee. There was no money.

“Today, by the Grace of God, we can afford to go to Lagos from the Camp by helicopter when we are in a hurry. I have enough children now who would say, “Just tell us what you want.”

“Glory be to God. When you are in active partnership with the Almighty God, you will begin to have unusual victories.

Preaching a sermon laced with prophecies and testimonies with the theme ‘Let the fire fall,” during the peak of the festival on August 13, Pastor Adeboye pointed out that the theme could mean having contact with God.

According to a transcription by the Discovery Media Crew, He explained that there are five basic ways in which man can have contact with God – all of which are beneficial. They are Eye Contact, as in the various instances when Jesus saw people with challenges and healed them.

“So, when we say Let the Fire Fall, we are asking that God will make contact with somebody here tonight – either in one of the five ways; or in some cases, it might even be in more than one way,” Pastor Adeboye said.

He promised the congregation the touch of God at the venue and after if they continue to be on the Lord’s side. Many people rushed forward for salvation when the altar call was made.

The following day, the wife of the General Overseer, Pastor Folu Adeboye preached at the Sister’s Summit/Conference with the topic, “Women as Temple of the Most High GOD.”

She said that Christian women are the Temple of the Living God and in every Temple, God expects His spirit to dwell there.

“If the spirit of God is living us as temples of God, then that spirit must continually move us. We have to uphold purity; be an example in purity.

“As the Temple of the Living God, we should make our lives to be a ‘Life of Worship’ in spirit and truth

“We are the Temple of the Most High God – The House of Worship of God. That is why we should not find it difficult to worship God anywhere in the world.”

She added that women, as Temple of God, should not worship Him with a lying tongue or a lying heart but to worship Him sincerely.

“If we are a Temple of God and the spirit dwells in us, we can command the world on any ground and in any way, and the world must obey.

“As the Temple of God, we must keep ourselves sanctified and ready to be used by the Master.”

She urged women to use the Temple to do good works so that people will glorify God.