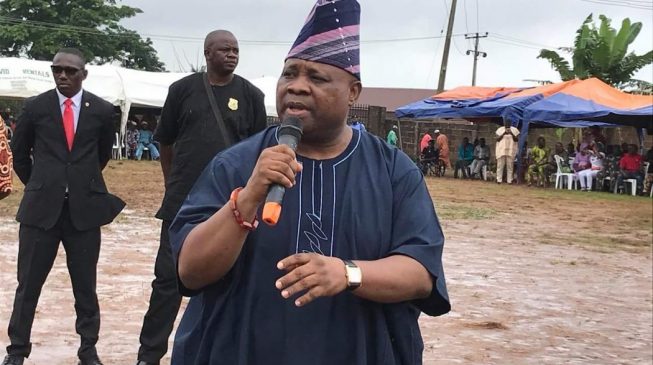 09:53 2019
Print This Article Share it With Friends
👤by Dyepkazah Shibayan  0 Comments
Advertisement

Ademola Adeleke, Peoples Democratic Party (PDP) governorship candidate in Osun state, has filed a notice of appeal at the supreme court over the verdict of the appeal court.

The appellate court had declared Isiaka Oyetola as the duly elected governor of Osun, dismissing the verdict of the tribunal which favoured Adeleke.

In a statement, Niyi Owolade, a counsel to Adeleke, said the PDP candidate asked the apex court to set aside the verdict of the appeal court and uphold that of the tribunal.

Owolade said Onyeachi Ikpeazu, a senior advocate of Nigeria (SAN), is leading 23 senior lawyers to file four appeals against “each of the four majority judgements of the appeal court.”

“The appeals are against [the] majority judgement in favour of Gboyega Oyetola, All Progressives Congres, the Independent National Electoral Commission and the striking out of the cross appeals of Senator Adeleke,” the lawyer said.

“The first Appeal was against the majority lead judgement delivered by Justice J.H Sankey, it is premised on 13 grounds. Senator Adeleke is seeking the following reliefs from the Supreme court; To allow the appeal, Set aside the judgement of the appeal court delivered in favour of Oyetola and Dismiss Oyetola’s appeal against the decision of the Tribunal.

“The third judgement appealed against was the ruling in favour of INEC, it is based on 17 grounds Senator Adeleke listed particulars of errors committed by the judges of Appeal Court and sought the following: An order of the supreme Court allowing his appeal, An order of Supreme Court setting aside judgement of Court of Appeal and restoring the judgement of tribunal delivered on  the 22nd of March.”

TWITTER @thecableng
Copyright 2019 TheCable. All rights reserved. This material, and other digital content on this website, may not be reproduced, published, broadcast, rewritten or redistributed in whole or in part without prior express written permission from TheCable.
Tags
Adegboyega OyetolaAdemola AdelekeOsunSupreme court
Advertisement