Adoke raises the alarm, says EFCC planning to abduct him 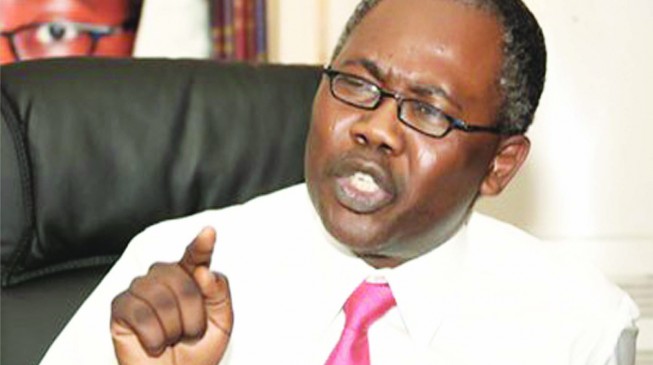 11:04 2017
Print This Article Share it With Friends
👤by Jamilah Nasir  0 Comments
Advertisement

Mohammed Adoke, former attorney-general of the federation and minister of justice, says he is aware of the threats on his life and the alleged plan of the Economic and Financial Crimes Commission (EFCC) to “illegally abduct and forcibly drag me to Nigeria.”

Adoke in a statement on Sunday said the anti-graft agency was working on the order of the presidency to humiliate and detain him for challenging his “continuous persecution, intimidation and harassment by the EFCC” in court.

Adoke said he had made effort to explain to the EFCC and the attorney general of the federation his role in the controversial the OPL 245 settlement agreement between the federal government and Malabu Oil & Gas Limited which was brokered by the administration of former president Olusegun Obasanjo.

He added that despite his efforts, those whose interest he did not uphold using the benefit of his office took to persecuting him.

On May 6, unidentified gunmen invaded the home of Bashir, his younger brother, in search of “hidden dollars”.

Alsom on July 14, a team of policemen invaded the country home of Adoke in Okene, Kogi state.

“I made spirited efforts to engage with relevant officials of government including the EFCC, the office of the attorney general of the federation and the presidency to furnish them with all the information in respect of the OPL 245 settlement agreement between the federal government of Nigeria and Malabu Oil & Gas Limited which was brokered by the administration of President Olusegun Obasanjo, GCFR,” Adoke said.

“I also furnished copies of relevant agreements and presidential approvals to implement the settlement agreement; evidence that the signature bonus of US$210 million due to government was duly paid and that all the officials that were involved in the implementation of the settlement agreement acted in furtherance of the requisite presidential approval to actualize government’s desire to end a long standing dispute over the ownership and operation of Block 245 that had prevented the commercial exploitation of the block for the benefit of the country.

“Despite my best endeavour to explain the transaction, it became obvious that those who felt aggrieved by my refusal to use my office to further their interests in Malabu Oil & Gas Limited, (the beneficiary of the OPL 245 Settlement Agreement) were intent on impugning the transaction in order to strengthen the hands of their collaborators in government to repudiate settlement.

“It was against this background that I approached the federal high court for interpretation of the provisions of sections 5(1); 147, 148, and 150 of the constitution of the federal republic of Nigeria, 1999 as amended in order to determine whether as a minister in the government of the federation, I could incur criminal liability for carrying out the lawful directives of the president and commander-in-chief, particularly where it has not been shown that I acted in excess of such authority or directive.

“I was made to understand this move did not go down well with certain persons in the presidency and the EFCC, hence the renewed harassment and intimidation that followed in form of searches of my residences in Kano and Okene and that of my brother.

“I have petitioned the UN special rapporteur on the Independence of judges and lawyers about my plight and the deliberate efforts being made by the EFCC and the government to deny me my livelihood, family life, as well as my legitimate right to fundamental freedoms.

“I therefore wish to use this medium to once more sensitise Nigerians and the international community about the flagrant abuse of my rights being perpetrated by Nigerian authorities under the guise of fighting corruption and the plan to illegally abduct me against all known international laws, rules and norms in order to forcibly take me to Nigeria akin to the botched ‘Umaru Dikko Saga’ in the UK in 1984 for the sole purpose of humiliating and illegally detaining me indefinitely for daring to challenge the actions /illegalities of the EFCC before Nigerian courts and relevant UN human rights mechanisms.”

TWITTER @thecableng
Copyright 2020 TheCable. All rights reserved. This material, and other digital content on this website, may not be reproduced, published, broadcast, rewritten or redistributed in whole or in part without prior express written permission from TheCable.
Tags
abductEFCCMohammed Adoke
Advertisement