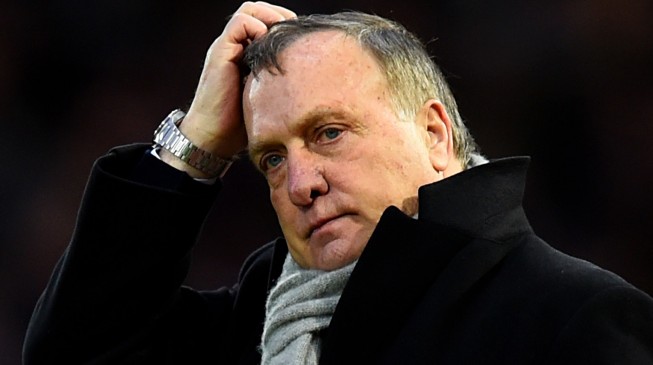 14:42 2015
Print This Article Share it With Friends
👤by Victor Akhidenor  0 Comments
Advertisement

Dick Advocaat has stepped down as Sunderland coach with the team yet to win a Barclays Premier League game this season.

The 68-year-old was appointed in March and guided them to safety, but a poor start to the season has seen the Black Cats slide to second-from-bottom in the league.

The club announced the news in a statement a day after Advocaat’s final game in charge, a 2-2 draw with West Ham United.

“Sunderland AFC have announced that Dick Advocaat has left his position as head coach at the club,” the statement read.

“The Dutchman informed the chairman of his decision to step down from his role and departs the Stadium of Light with immediate effect.”

Advocaat departs Sunderland, his first club job in England, after seven months in charge after taking over from Gus Poyet who was sacked.

“This is a very special football club, with so many great people, but I feel it is the right time to do this – not for me, but for the club,” Advocaat told the club’s official website.

“I have made the decision to go after only eight games as I felt it was important to give everyone time turn things around – like we did last year. I am thankful to the chairman (Ellis Short) for understanding my feelings and I remain on good terms with everyone at the club. I have some wonderful memories to take with me and I hope I will return to see everybody again in the future.”

Sunderland are now looking for a sixth manager in four years.

Since Steve Bruce was sacked in November 2011, Martin O’Neill, Paolo di Canio, Gus Poyet and Advocaat have managed the club.

TWITTER @thecableng
Copyright 2020 TheCable. All rights reserved. This material, and other digital content on this website, may not be reproduced, published, broadcast, rewritten or redistributed in whole or in part without prior express written permission from TheCable.
Tags
Barclays Premier LeagueDick AdvocaatSunderland
Advertisement