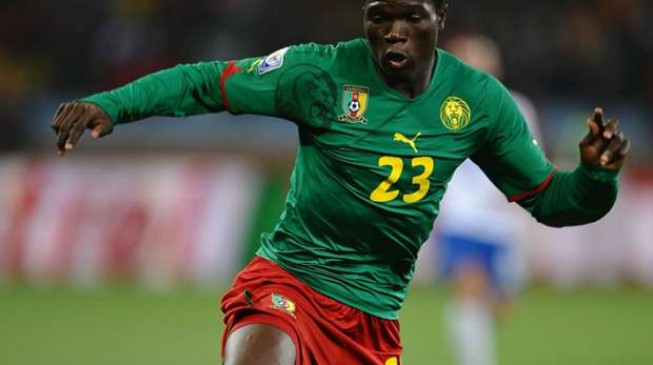 12:01 2014
Print This Article Share it With Friends
👤by Victor Akhidenor  0 Comments
Advertisement

Champions Nigeria were handed a shock defeat at the start of the group phase of African Nations Cup qualifying on Saturday, while Cameroon started their post-Samuel Eto’o era with an away win.

Other 2014 World Cup teams Algeria, Ghana and Ivory Coast had mixed results after opening the campaign for a place at the AFCON finals in Morocco in January.

Burkina Faso, Gabon and Tunisia won at home and there was an away win for Cape Verde.

Winners in 2012, Zambia, were held to a goalless draw at home by Mozambique.

Congo became the first country in 33 years to win a competitive match in Nigeria, as they beat the Super Eagles 3-2 in Calabar with two goals from France-born striker, Thievy Bifouma.

The then Green Eagles were last beaten in a competitive home game when they lost 2-0 to Algeria in a World Cup qualifier in Lagos in 1981.

Bifouma put Congo 2-1 ahead in the 40th minute before converting a penalty in the 54th.

The Congolese had been eliminated in the knockout rounds but were given a reprieve by CAF when opponents Rwanda were found guilty of fielding an ineligible player.

Cameroon began life without Africa’s most decorated player, Samuel Eto’o, with a comfortable 2-0 Group D win in the Democratic Republic of Congo.

Alex Song was also absent as he is serving a three-match ban for a red card during a disastrous Cameroon World Cup campaign in Brazil, where they lost all three group games.

Ivory Coast began a new era as well without Didier Drogba, who has also quit the international stage, by defeating Sierra Leone 2-1 in the other Group D game.

Gervinho scored the winner as the Ivorians came from behind to beat their West African rivals.

Ebola virus outbreak dominated the headlines in the lead up to the game, with Sierra Leone’s support staff barred from travelling to Abidjan by Ivorian health authorities.

Ghana, like Nigeria, also failed to take advantage of playing at home as Uganda forced a 1-1 draw at Baba Yaro Stadium in Kumasi.

Tony Mawejje put the Cranes ahead on the stroke of halftime in Group E but Andre Ayew levelled from a 50th-minute spot-kick.

El Arabi Soudani and Yacine Brahimi put them ahead after absorbing early pressure. Saladin Said scored a consolation for the Ethiopians from the spot in the fifth minute of injury time.

Zambia, the 2012 African Cup of Nations winner, began with a 0-0 home draw with Mozambique and Cape Verde took advantage of Zambia’s slip to win 3-1 at Niger and lead Group F.

South Africa, Senegal and Guinea all opened the three-month qualifying competition with victories on Friday.

TWITTER @thecableng
Copyright 2020 TheCable. All rights reserved. This material, and other digital content on this website, may not be reproduced, published, broadcast, rewritten or redistributed in whole or in part without prior express written permission from TheCable.
Tags
AfconAlgeriaCAFCalabarCongoDidier DrogbaEFE AMBROSEGhanaIvory CoastMoroccoMozambiquenigeriaRwandaSamuel Eto’oSouth AfricaThievy BifoumaZambia
Advertisement