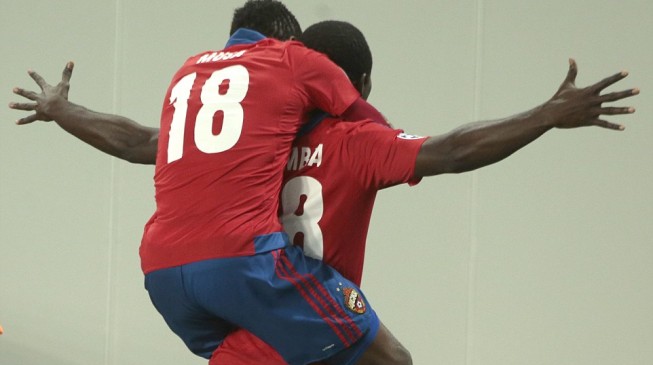 23:38 2015
Print This Article Share it With Friends
👤by Victor Akhidenor  0 Comments
Advertisement

CSKA Moscow withstood a second-half fight back from Dutch side PSV Eindhoven to secure their first win in the UEFA Champions League group stage with a 3-2 victory on Wednesday.

Goals from Ahmed Musa and a double from Seydou Doumbia put the Russian side 3-0 up at halftime in the Group B encounter.

But Maxime Lestienne scored twice within eight minutes after the break as the visitors launched a comeback that almost earned them a share of the spoil before they were undone by an 80th-minute red card for Santiago Arias.

All four teams in the group are on three points after Manchester United also beat Wolfsburg 2-1 in the other match at Old Trafford.

Super Eagles assistant captain gave his side the lead after seven minutes when he stabbed the ball into the net from close range after PSV failed to clear Zoran Tosic’s corner.

The hosts doubled their lead on 21 minutes with a header from Doumbia which flew past PSV keeper Jeroen Zoet.

The Ivorian made it 3-0 from the spot after Tosic was fouled, but he wasted a chance for a hat-trick when he blasted a second penalty over the bar a minute before halftime, following a foul on Musa.

PSV rallied after the break with Lestienne scoring from close range on 60 minutes and firing in a second goal eight minutes later.

TWITTER @thecableng
Copyright 2019 TheCable. All rights reserved. This material, and other digital content on this website, may not be reproduced, published, broadcast, rewritten or redistributed in whole or in part without prior express written permission from TheCable.
Tags
AHMED MUSACSKA Moscowmanchester unitedSeydou DoumbiaWolfsburgZoran Tosic
Advertisement