Akinwunmi: Cocoa production to increase by 56 per cent 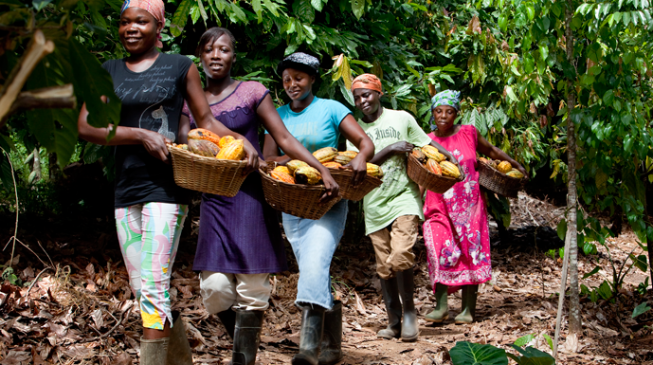 18:50 2014
Print This Article Share it With Friends
👤by Busayo Sotunde  0 Comments
Advertisement

Hybrid seedlings will see cocoa production in Nigeria soar from 350,000 metric tons to 800,000 metric tons by the year 2017, minister of agriculture and natural resources, Akinwunmi Adesina, has said.

“In another 2 1/2 to 3 years you’re going to see a huge bump in the production of cocoa … We expect that within a couple of years you will see that jump to 800,000 metric tons,” Akinwunmi told Bloomberg.

This prediction represents about 56 per cent growth in cocoa production.

In August, Akinwunmi said the government had distributed 39 million seedlings free of charge to farmers, enough to plant 40,000ha of new cocoa fields.

The minister expects Nigeria to surpass leading cocoa producers in Africa. He had predicted a $1.5bn revenue in cocoa exports this year.

“We can afford to lose to the Elephants of Ivory Coast and the Black Stars of Ghana in soccer, but not in cocoa. So we are after them,” he said.

Nigeria is the third largest cocoa producer in Africa (the fourth in the world) after Ivory Coast and Ghana, which produces 1.73 million tonnes and 920,000 tonnes respectively.

Another area where Nigeria is vying for agricultural growth is in the production of commercial rice.

Nigeria intends to be a net exporter of rice in the next three years.

“Rice is the most profitable commodity in Nigeria, with a rate of return for investing in rice sitting between 42 and 45 per cent,” Adesina said.

Olam and Dangote are two multinational companies that have invested in commercial production of rice recently.

TWITTER @thecableng
Copyright 2020 TheCable. All rights reserved. This material, and other digital content on this website, may not be reproduced, published, broadcast, rewritten or redistributed in whole or in part without prior express written permission from TheCable.
Tags
agricultural growth in NigeriaAkinwunmi Adesinacocoa production in NigeriaNigeria cocoa exportrice production in Nigeria
Advertisement