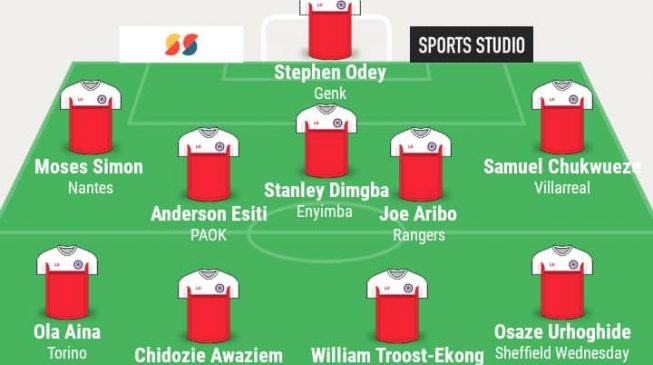 08:37 2020
Print This Article Share it With Friends
👤by Remi Sulola  0 Comments
Advertisement

In goal post, usual suspect Daniel Akpeyi gets the nod as a result of his heroics in Kaizer Chiefs’ win over Cape Town City.

Fatai Osho of Enyimba FC is the gaffer in charge of the team.

Chiefs continued their good run thanks to their 32-year-old net minder. He came and won all Cape Town’s crosses and showed what a good ‘keeper can bring to a team. Influential.

He was always a big trouble to Leeds United with his probing down the right flank. Osaze put in a fine display in the 2-0 win. Determined.

Always provided safety in front of his goalkeeper, he marked the opponents out of the game. When heading home his goal, he leapt like a salmon twisting and spinning as if he was dodging a Brown bear in an Alaskan river. Dominant.

As always, he led from the centre and nullified any connection between the visitors’ forward line and midfield. Always in position to read the game well and made his interventions telling with the balance to intercept left or right. Commanding.

Stayed back in defence when needed but when the occasion arose, he bolted forward releasing the pressure as an outlet on the left flank while showing incredible fitness and energy. Prominent.

Played in midfield then switched into defence and started causing problems. Impressive.

The versatile Nigeria was easily Man of the Match with his sheer resourcefulness and energy. He made life difficult for the opposition. Persistent.

Simply outstanding, popping up everywhere with several goal-scoring attempts. He was always a difficult opponent every time he got hold of the ball. He set up a goal in the win at St Etienne. Dazzling.

Wore out Orihuela defender with his energy and ran riot. Antagonistic.

Stephen Odey was on target for Genk in their 2-1 victory over Ferencvaros. The former MFM striker got the decisive goal with five minutes to the end of the game.

The winger did not waste a shot and scored a well-deserved hat trick for Enyimba over the weekend. Outstanding.

TWITTER @thecableng
Copyright 2020 TheCable. All rights reserved. This material, and other digital content on this website, may not be reproduced, published, broadcast, rewritten or redistributed in whole or in part without prior express written permission from TheCable.
Tags
Anderson EsitiFatai OshoJoe AriboMoses SimonOla AinaSamuel ChukwuezeStanley DimgbaStephen OdegWilliams Troost-Ekong
Advertisement