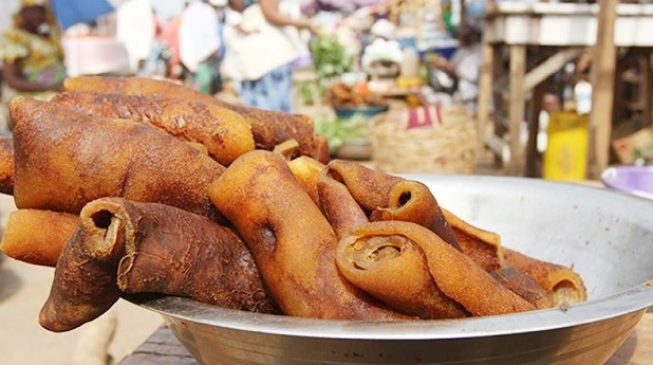 20:00 2019
Print This Article Share it With Friends
👤by Ebunoluwa Olafusi  0 Comments
Advertisement

The Lagos state government has warned consumers against buying some cow hide, known as “ponmo,” being sold in some markets in the state.

A statement by Adeola Salako, director of public affairs, Lagos ministry of health, said three persons involved in the sale of the “poisonous ponmo” in Ojo and Iba local government areas of the state have been arrested.

Salako said the cow-skin was seized in large quantities, adding that samples of the confiscated ponmo had been sent to the National Agency for Food and Drug Administration and Control (NAFDAC) to test their suitability for consumption.

“The Commissioner for Health, Dr. Jide Idris, who disclosed this in his office today (Sunday) while reviewing report of preliminary investigation and enforcement carried out on the sale of the toxic ponmo in the areas, stated that the three persons involved have been charged to court, while samples of the confiscated ponmo had been sent to the NAFDAC laboratory for suitability test analysis for human consumption,” the statement said.

The commissioner noted that the attention of the state government had been drawn to the activities of traders who deal in the sales of the poisonous cow-skin at odd hours in different locations in the two local government areas.

“Preliminary investigations and suspects tracing revealed that the traders were very active in the early hours between the hours 4.00am and 6.00am at various locations such as Volkswagen bus stop, iyana iba, Afolabi Ege Markets, all within Ojo local government and Iba local council areas of the State,” he said.

“Furthermore, a company said to be located at ijedodo area of Iba LCDA was indicted as source of supply of this toxic Ponmo and has subsequently been put under surveillance.”

Salako called on the public to be vigilant and report any sales of unwholesome foods and food products to environmental health officer in their nearest local government or to the ministry of health.

TWITTER @thecableng
Copyright 2020 TheCable. All rights reserved. This material, and other digital content on this website, may not be reproduced, published, broadcast, rewritten or redistributed in whole or in part without prior express written permission from TheCable.
Tags
Adeola Salakocow hidelagos stateMinistry of healthnafdacponmo
Advertisement