Amaechi: Why we convinced CCECC to build railway wagon plant in Ogun 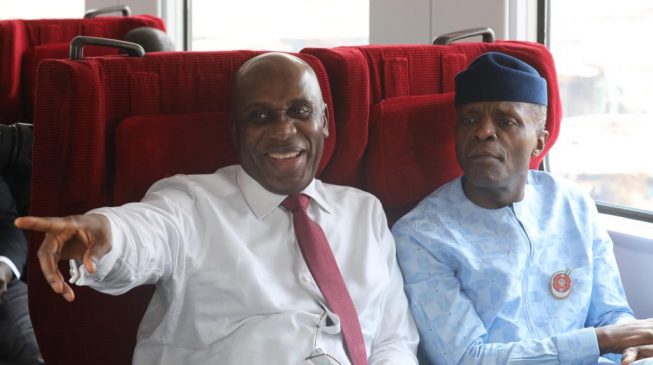 20:08 2019
Print This Article Share it With Friends
👤by Haleem Olatunji  0 Comments
Advertisement

He said this during the official ground-breaking ceremony performed by Vice-President Yemi Osinbajo, on Saturday.

The minister said the plant is one of the gains of the federal government’s partnership with the Chinese Civil Engineering and Construction Company (CCECC), which made the investment.

“The Ministry of Transportation realizing the need of the advantage to set up this type of plant considering the potential need in view of the on-going rail projects in the country and the sub-region, encouraged Messrs CCECC to establish this plant,” he said.

“It is expected that the plant would generate job opportunities for Nigerians and as well facilitate the much-desired objective of the government towards the local content capacity development.

“It was in the pursuit of these objectives that the Federal Ministry of Transportation signed an agreement with Messrs. CCECC Nig. Limited in March, 2018 to establish this plant for the production and assembling of rolling stock, spare parts and maintenance equipment in Nigeria. Consequently, Messrs. CCECC conducted a feasibility study in which the choice of Kajola, Ogun State was arrived at as the suitable location for the project.”

Amaechi said the plant will be the first of its kind in Nigeria, adding that its first set of wagons will be used in the Lagos-Ibadan and Abuja-Kaduna railway operations.

He said at its completion, the project will generate at least 5,000 jobs .

“This will be the first of its kind in Nigeria and the first batch of the wagons to be assembled from the production line of this plant will form part of the rolling stock for Lagos – Ibadan and Abuja – Kaduna Railway operations.

“Subsequently, other rolling stock would be produced as its production capacities increase.

“The project when completed would be able to generate about 5,000 jobs and in the long run Nigeria would be able to manufacture rolling stock for Nigerian use and for other African countries.”

In his remark, Jiang Yigao, managing director of CCECC, said the plant has the capacity to produce 500 wagons each year.

He said the concept of the project is to make Nigeria self-sufficient and also to become an exporter in the long run.

“With the completion and operation of the Abuja to Kaduna Railway, Abuja Rail Mass Transit and work on other railway projects, the plant will play a pivotal role in ensuring the provision of wagons,” he said.

“The socio-economic benefits of the plant cannot be overemphasized. A number of youths will be employed and it will stimulate the creation of other ancillary jobs and bring development not only to Kajola community but the south-west in general.

“The plant has the capacity to produce 500 wagons per year and will undertake key production processes like welding, assembly, painting, drying and testing. It has the capacity to produce open, container, flat, tank and box wagons. Nigeria is surely marching to greater development and CCECC will continue to partner with Nigeria in ensuring the technological development of the country.”

TWITTER @thecableng
Copyright 2020 TheCable. All rights reserved. This material, and other digital content on this website, may not be reproduced, published, broadcast, rewritten or redistributed in whole or in part without prior express written permission from TheCable.
Tags
CCECCministry of transportationOgunrailwayrotimi amaechi
Advertisement