Ambode: The legislature is first casualty of military incursion 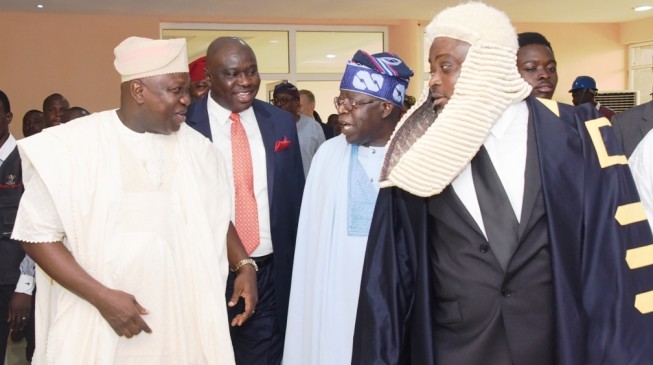 17:17 2017
Print This Article Share it With Friends
👤by Fredrick Nwabufo  0 Comments
Advertisement

Akinwumi Ambode, Lagos state governor, says the legislature is the first victim of a military incursion.

The governor said this while speaking at a special parliamentary session to the mark the 50th anniversary of the state on Monday.

He said in any military incursion the constitution is usually suspended against the wish of the people.

Ambode said the legislature was the most exposed governance model of the current democratic dispensation.

He also praised the relationship between the executive and legislature in the state.

“Today, we are celebrating the contributions of the Lagos state house of assembly, particularly the 8th assembly in the last two years, to the true principles of democratic governance through passage of bills that advance the principle of governance and promotion of social welfare of the people within the ambits of the law,” he said.

“It is on record that military incursion into governance has always made the legislature its first victim by suspending the constitution with all powers against the wishes of our people. Therefore, the legislature can be said to be the most exposed in governance model in the current democratic dispensation, if we have to give its true meaning and relevance in a representative government.

“The superlative performance of the 8th assembly, including previous assemblies, can be attributed to the quality of leadership that has been produced through a matured and democratic process with the purpose of providing a democratic process that would benefit our people.

“Over the years, the legislative arm of government in Lagos state has been a shining beacon of democratic independence and responsiveness. It has never shirked its assigned role or responsibility even in the face of provocation. It has continuously engaged the electorate in the process of making laws through interactive engagements and contributions to the making of laws.”

Bola Tinubu, national leader of the All Progressives Congress (APC), also spoke at the session where he said the state would resist every attempt by some elements in the military to overthrow the government.

There have been rumours of plots to overthrow the government lately. Last week, Tukur Buratai, chief of army staff, issued a stern warning to officers whom he said were meeting with politicians for “undisclosed reasons”.

TWITTER @thecableng
Copyright 2020 TheCable. All rights reserved. This material, and other digital content on this website, may not be reproduced, published, broadcast, rewritten or redistributed in whole or in part without prior express written permission from TheCable.
Tags
Akinwumi AmbodeBola Tinubulagos state
Advertisement