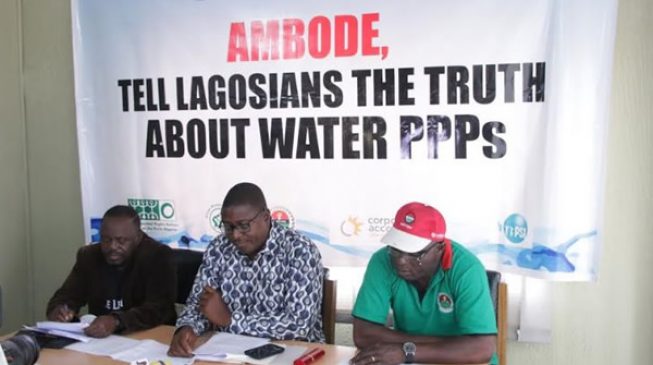 13:29 2018
Print This Article Share it With Friends
👤by Wale Fatade  0 Comments
Advertisement

Activists and labour unions have demanded that the Lagos state government tell Lagosians “the truth” about water public private partnerships that it is allegedly introducing through the backdoor.

At a press conference in Lagos on Thursday, Akinbode Oluwafemi, deputy director, Environmental Rights Action, an environmental rights group, and part of the Our Water, Our Right Coalition challenged the state government to come clean on the partnerships.

Oluwafemi claimed that Global Water Intelligence magazine, “a high value business information for the water industry disclosed that multiple PPP projects are in the works for Lagos.”

He added that officials of the state government were silent on this and that the website of Lagos Water Corporation has no information on the projects.

A quick check on the organisation’s website confirmed this.

Akinbode said “some of the identified projects – Adiyan II, Igbonla, Yewa I, Odomola II, Ibeshe I, Ibeshe II and Yewa II have project lengths of up to 35 years were only updated on GWI tracker a week after the World Bank executives visited Governor Akinwumi Ambode on May 9 and Engineer Mumuni Badmus, the helmsman of the Lagos Water Corporation is listed as the contact person for the project.” 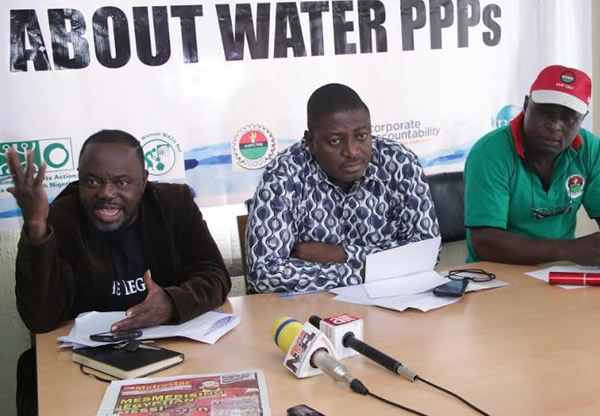 The coalition expressed worry that “If these projects should move forward it will translate to private control of a gripping 57% of the entire Lagos water system capacity.”

It therefore demands: “full disclosure of the PPP projects in the water sector and a halt to the projects, disclosure of all International Finance Corporation and World Bank activities and discussions with Lagos State government officials regarding water; including formal and informal advisory roles, broad public participation in developing plans to achieve universal access to clean water and the need for the state government to hearken to our demands that it upholds the human right to water as an obligation of the government representing the people and the government prioritize water for the people, through a comprehensive plan that invests public funds in the water infrastructure necessary to provide universal water access which will create jobs, improve health care and invigorate the Lagos economy.”

TWITTER @thecableng
Copyright 2020 TheCable. All rights reserved. This material, and other digital content on this website, may not be reproduced, published, broadcast, rewritten or redistributed in whole or in part without prior express written permission from TheCable.
Tags
akinwunmi ambodeLagos State GovernmentLagosianswater PPPs
Advertisement