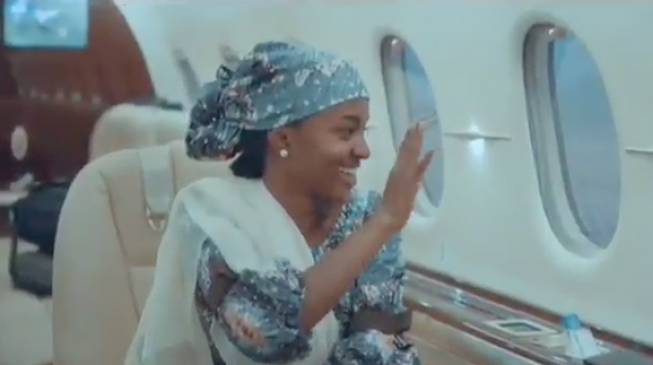 11:52 2020
Print This Article Share it With Friends
👤by Jamilah Nasir  0 Comments
Advertisement

Aisha Buhari, the first lady, on Monday tweeted a video of Hanan, one her daughters, waving at a crowd from the presidential jet.

The 55 seconds clip, accompanied with a musical background, showed Hanan capturing the culture of Bauchi people.

Hanan’s use of one of the aircraft in the presidential fleet to a private ceremony in Bauchi had stirred a controversy, with many accusing her family of abusing power.

Femi Falana, human rights lawyer, had said it was illegal for Hanan to use the jet on a private trip.

Garba Shehu, presidential spokesman, had defended the first daughter, saying the presidential jet can be used by Buhari’s wife and children.

He explained that the presidency authorised the visit and informed the office of the national security adviser (NSA) to release the jet, adding that the release of the aircraft followed due process.

Rilwanu Adamu, emir of Bauchi, had reportedly invited Hanan to document an annual festival and some tourist attractions in the state.

Amidst the backlash and controversy, the wife of the president took to her social media handles to share a clip from the video coverage of the event by her daughter.

Hanan was in the news late last year after she bagged first class from a university in the UK.

Below is a video of the president’s daughter inside the jet:

TWITTER @thecableng
Copyright 2020 TheCable. All rights reserved. This material, and other digital content on this website, may not be reproduced, published, broadcast, rewritten or redistributed in whole or in part without prior express written permission from TheCable.
Tags
Aisha BuhariHanan BuhariPhotographypresidential jet
Advertisement