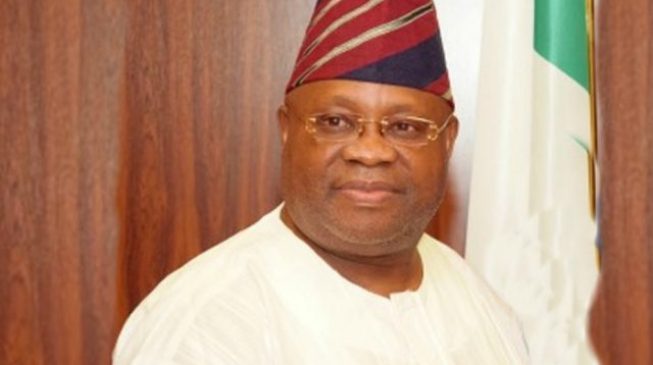 12:25 2019
Print This Article Share it With Friends
👤by Jamilah Nasir  0 Comments
Advertisement

An Abuja high court had on Tuesday ruled that Adeleke was not qualified to contest the September 2018 election on the basis that he did not possess a school leaving certificate.

The ruling strikes out an earlier declaration by the state election tribunal that the Osun-west senator won the election.

But Owolade, in a statement issued on Tuesday, said the high court’s judgement cannot stand, promising to appeal it in the supreme court.

He further argued that two courts of coordinate jurisdiction had earlier ruled on the matter and absolved Adeleke of wrongdoings.

Owolade also said that the recent ruling comes after the expiration of the 180 days hearing period for ruling on pre-election matters.

“While we are set to appeal the judgement, we also find it compelling to put the records straight by listing out the fatal flaws in the ruling and why it cannot stand before any court.

“It would be recalled first of all that the matter in question has been addressed by two High Courts’ ruling, affirming that in the face of the constitution, Senator Ademola Adeleke is qualified to run for the governorship office. The two rulings delivered in September 2018 held that Senator Adeleke satisfied all requirements of the law to contest for office.

“It is trite in law that once a court of coordinate jurisdiction has ruled on a matter, court of similar jurisdiction cannot entertain it. Shockingly, the Bwari judge breached this precept to subvert justice.

“Secondly, we want to note that the judge further erred in law by failing to take note of the expiration of 180 days for ruling on pre-election matters. Even when a December 2018 judgement with respect to the issue was presented, the judge chose to ignore it.

“We note that the judge violated the law by adjudicating over a matter whose filing and hearing period has expired.

“Thirdly, the West African Examination Council was also subpoened by the court at the instance of the two APC plaintiffs (working covertly with some moles within PDP) to present evidence of facts that Senator sat for the WASC Exams. The council produced the listing of all students who sat for the May/June examination in 1981 alongside the Senator in addition to the certified true copies of his school certificate result.

“From the evidence produced by the Council, it is crystal clear that Senator Ademola Adeleke was indeed educated beyond the minimum requirement of “up to secondary school level” as stipulated by law and therefore qualified to run for the office of governor in accordance with section 177 (D) of 1999 CFRN (as amended). Not withstanding, the judge still went ahead to rule otherwise.

“The only statutory body empowered by law to determine authenticity of a secondary results is the West African Examination Council and they confirmed the authenticity of Senator Adeleke’s result by producing a CTC of the same result. What evidence did the judge therefore base his ruling on?

“From the foregoing ,we affirm that today’s judgement of the Bwari court is a travesty of justice, a purchased ruling designed to negatively affect the outcome of Osun governorship judicial process.

“We declare unequivocally that the ruling being so glaringly against tested facts and the law cannot stand. It is also clear that the ruling cannot in anyway stop the reality that Senator Ademola Adeleke fulfilled constitutional requirements to be Governor of Osun State.

“This is another failed bid in the efforts of detractors and enemies of democracy. Senator Ademola Adeleke is not only qualified but by the grace of God will soon be sworn in as the legitimate Governor of Osun State.”

TWITTER @thecableng
Copyright 2019 TheCable. All rights reserved. This material, and other digital content on this website, may not be reproduced, published, broadcast, rewritten or redistributed in whole or in part without prior express written permission from TheCable.
Tags
AdelekeAdemola AdelekeCourtOsun
Advertisement