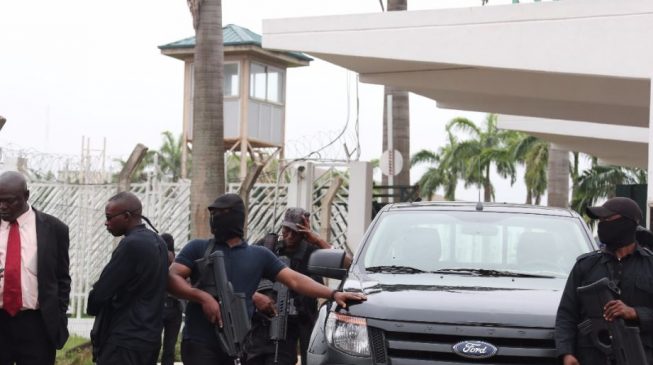 09:17 2018
Print This Article Share it With Friends
👤by Dyepkazah Shibayan  0 Comments
Advertisement

The All Progressives Congress (APC) has accused Bukola Saraki of plotting to incite violence at the national assembly in a bid to stop his removal as senate president.

On Tuesday, operatives of the Department of State Services (DSS) prevented lawmakers, for almost an hour, from gaining entrance into the national assembly.

According to the APC, the “timely intervention” of the security operatives averted a potential loss of lives, injuries and destruction of property.

In a statement on Wednesday, Yekini Nabena, acting spokesman of the APC, alleged that Saraki mobilised thugs to the national assembly.

“Following Tuesday’s incident at the national assembly, our investigations have now uncovered the sinister plot hatched by the Senate President, Dr. Bukola Saraki to foment violence in the legislative chamber all in a bid to stop his impeachment,” the statement read.

“Our investigations uncovered and noted the following: We are now aware that the timely intervention of the security operatives forestalled the planned violence which could have led to possible deaths, injuries and destruction of property in the national assembly on Tuesday.

“Why did the senate president mobilise thugs to the national assembly who almost lynched Hon. E.J. Agbonayinma, the only APC federal lawmaker present but for the timely intervention of security operatives.

“Why did the senate president reconvene the national assembly? Ostensibly as a pre-emptive move to frustrate federal lawmakers move to impeach him.

Nabena called on security agencies to probe the incident and take necessary actions.

“As espoused in our earlier statement, whilst our contention with the leadership of the national assembly as currently constituted is a matter of public record, we still believe that the legislature as an independent arm of government must be allowed free reign for vibrant contestation of ideas and values amongst its members within the context of their constitutional mandate and for the benefit of the Nigerian people,” he said.

“Finally, we reiterate our call for the senate president to resign from the position immediately as he no longer has the moral and legitimate ground to occupy that position as a member of the minority PDP.

Yusuph Olaniyonu, spokesman of the senate president, is yet to respond to the allegation.

Following the siege on the national assembly, Acting President Yemi Osinbajo sacked Lawal Daura as director-general of the DSS.

TWITTER @thecableng
Copyright 2020 TheCable. All rights reserved. This material, and other digital content on this website, may not be reproduced, published, broadcast, rewritten or redistributed in whole or in part without prior express written permission from TheCable.
Tags
APCbukola sarakiNational assembly blockade
Advertisement