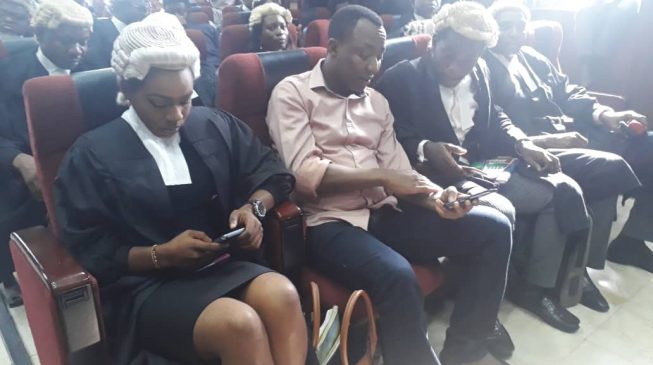 08:54 2019
Print This Article Share it With Friends
👤by Dyepkazah Shibayan  0 Comments
Advertisement

The All Progressives Congress (APC) has accused former Vice-President Atiku Abubakar and the Peoples Democratic Party (PDP) of spreading falsehood.

The party said this in reaction to Atiku’s comment on the rearrest of Omoyele Sowore, convener of #RevolutionNow Movement.

While condemning the action of the Department of State Services (DSS), Atiku had said Nigeria was sliding into dictatorship.

But in a statement by Lanre Issa-Onilu, APC spokesman, the ruling party said “Atiku Abubakar has typically chosen to present and spread their concocted ‘alternative facts’ and lies on the incident”.

“The presidency has clarified that the DSS does not necessarily need the president’s permission in all cases to carry out its essential and constitutional responsibilities,” he said.

“Again, whether Sowore flouted any of his bail conditions or staged the incident in court is another matter which the court and prosecuting agency should address.

“Atiku in his horrid statement particularly accused the DSS of attacking the presiding judge among other lies being chorused by the PDP and their hirelings. Documentary evidence such as videos and pictures have shown that the tales are a complete ruse until anyone is able to present a contrary evidence.

“If Atiku’s intervention was sincere, having realized the truth, he has not deemed it proper to apologise to Nigerians for misinforming them on the incident. Instead, he hangs shamelessly on his lies. A commentator has correctly described Atiku as “the king of the bandwagon”.

“The PDP and Atiku, in their dubious attempt at painting the APC government bad by all means, have chosen to exercise no restraint whatsoever in spreading falsehood.”

The APC spokesman asked Nigerians to look at Sowore’s rearrest without sentiments.

“Our laws are clear on treason and Nigerians would expect decisive actions from our law enforcement agencies and government,” Issa-Onilu said.

“Any attempt to truncate our democracy and threaten our collective peace and safety must and will be resisted using the full weight and instrumentalities of the law.”

TWITTER @thecableng
Copyright 2020 TheCable. All rights reserved. This material, and other digital content on this website, may not be reproduced, published, broadcast, rewritten or redistributed in whole or in part without prior express written permission from TheCable.
Tags
APCatiku abubakarDSSomoyele soworePDP
Advertisement