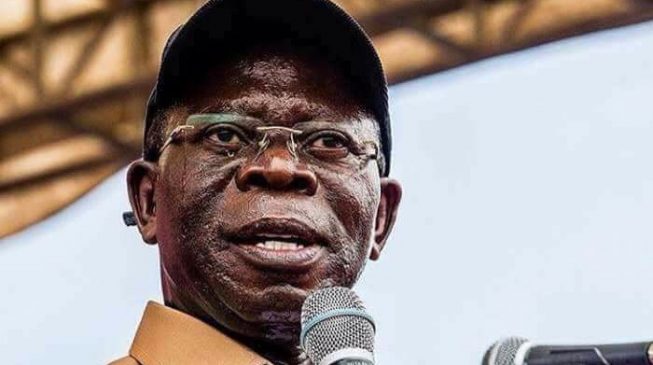 11:00 2019
Print This Article Share it With Friends
👤by Chinedu Asadu  0 Comments
Advertisement

Adams Oshiomhole says the All Progressives Congress (APC) is not in alignment with any other party in Rivers state.

Speaking when he featured on a Channels TV programme on Friday, the APC national chairman said neither him nor the party’s national working committee is aware of any of such alignment.

The APC did not field any candidate for the Rivers governorship election after the supreme court upheld the annulment of the party’s primaries and congresses.

But Rotimi Amaechi, minister of transportation, had said the APC will throw its weight behind Awara Biokpomabo, governorship candidate of the African Action Congress (AAC) in the state.

“This morning, the leadership of the party met and agreed that we would work with a party called African Action Congress (AAC), while we are still in court to reclaim our mandate,” he had said.

Oshiomhole, however, denied such alignment and said it has never been discussed with him.

The APC chairman said: “I have never spoken at any forum that we have aligned with any party. There is only one party (I oversee) and that is APC, if there is going to be alignment, I will know.

“I can’t choose to be in the know. That has never been discussed with me or with any of the members of the national working committee.”

‘I CAN’T APPOINT NEXT SENATE PRESIDENT OR SPEAKER’

Oshiomhole also denied planning to appoint the next principal officers of the 9th national assembly.

The APC currently has the majority lawmakers in the both chambers of the national assembly and is expected to produce the presiding officers.

The APC chairman said the party will decide on who will emerge the principal leaders, while also promising every geopolitical zone will be represented.

“Do I look like someone who can appoint or impose somebody on the senate, even if I wish to?” he asked, adding: “Is it be reference to my size or a standing army I have? All I have is the power to persuade, to negotiate and to point out what might go wrong if we do not talk together so that in the process of electing leaders, we do not run into crisis.

TWITTER @thecableng
Copyright 2020 TheCable. All rights reserved. This material, and other digital content on this website, may not be reproduced, published, broadcast, rewritten or redistributed in whole or in part without prior express written permission from TheCable.
Tags
Adams OshiomholeAPCrivers staterotimi amaechi
Advertisement