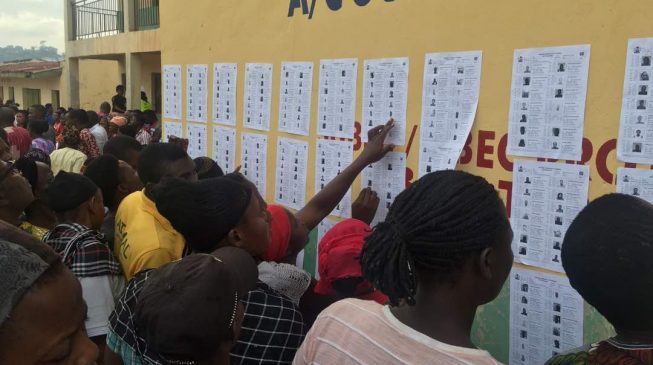 15:30 2018
Print This Article Share it With Friends
👤by Dyepkazah Shibayan  0 Comments
Advertisement

The All Progressives Congress (APC) says the ruling party is the best to move the country forward.

The party said this in a statement while congratulating Kayode Fayemi, Ekiti governor-elect, on Sunday.

Fayemi defeated Kolapo Olusola, the incumbent deputy governor of the state, who ran on the platform of the Peoples Democratic Party (PDP) in the election that held on Saturday.

The party said the people voted Fayemi because they trusted his ability to deliver on his campaign promises.

“The APC congratulates Dr. Kayode Fayemi, our party’s candidate, on his election as the governor of Ekiti state,” the statement by Bolaji Abdullahi, spokesman of the APC, read.

“The party notes that Dr. Fayemi ran an effective and positive campaign focused on his agenda of rebuilding the economy of the state and returning its lost values of integrity, prudence and decency.

“The party commends the Independent National Electoral Commission (INEC), security agencies, local and international observers, as well as other stakeholders, for their admirable role in making the Ekiti gubernatorial election one in which the people’s will has prevailed.

“We thank the Ekiti electorate for voting en masse for our party’s candidate. This is a demonstration of their trust and confidence in Dr. Kayode Fayemi’s ability to deliver on his campaign promises and a rejection of the crude politics of the PDP.

“We assure the people of Ekiti, and indeed all Nigerians, that our party is best placed to move the country forward and resolve the seemingly intractable problems that have held us back.”

TWITTER @thecableng
Copyright 2019 TheCable. All rights reserved. This material, and other digital content on this website, may not be reproduced, published, broadcast, rewritten or redistributed in whole or in part without prior express written permission from TheCable.
Tags
APCkayode fayemiPDP
Advertisement