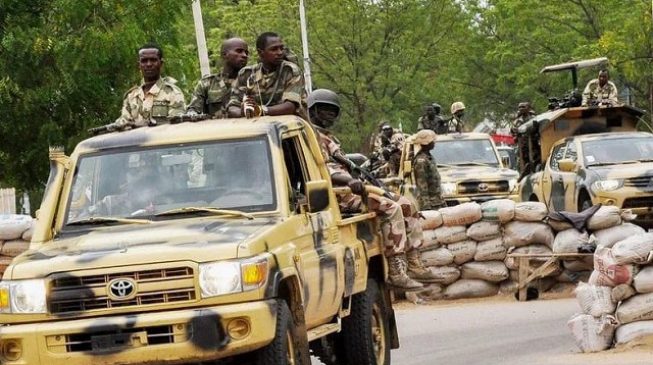 12:52 2018
Print This Article Share it With Friends
👤by Contributor  0 Comments
Advertisement

Three weeks ago, I stumbled across a picture on social media, which invoked sympathy. It got me thinking for a long time. The selfie was that of a gallant soldier fighting Boko Haram terrorism in the desert of the Northeast. It was the birthday of this soldier, a special day in his life and a day every other human being celebrates in style, pomp and pageantry. But the soldier’s case was different. He was “celebrating” the birthday on his duty post on the battlefront. What I saw displayed as spicing this special day of the soldier were a famished plate of rice, a pack of fruit juice and two sachets of pure water.

Sadly too, he didn’t mark this special day in forlornness alone, by the absence of his wife, children, family members, friends and associates; but no one feted him with birthday gifts or some special treats peculiar with such celebrations.

Even when he invited Nigerians on social media to join him in marking his birthday, he was ignored, as there were few responses. Almost a day after he made the post on Facebook, there were only about 20 “likes” and even fewer comments. That’s our mindset and perception on troops, who have sacrificed everything, including their lives for us to have peace and security.

While I reflected over the fate of this soldier, what assailed my thoughts endlessly was a sense of guilt. His plight symbolizes the lack of concern on our troops battling insurgency in the country.

There is no external aggression on Nigeria. Boko Haram is basically an internal problem. So, i tried to find justification for the emergence and sustenance of Boko Haram insurgency, but could not find any reason to placate me.

Next, I felt empathetic; not for the soldier, but for the aloofness of some Nigerians in appreciating the grave task of quelling the Boko Haram scourge by soldiers. I was piqued more with the consistency of this collective reticent disposition for our troops who have sacrificed everything to give us peace, comfort and security in our homes.

And December 25, 2018 was another big day in the lives of Christians globally. The commemoration of the birth of our Lord and personal Saviour Jesus Christ, a feast marked with funfair. The celebrations are usually elaborate and planned overtime.

It is a season observed with the signature of visits to family members and friends, exchange of gifts, carnivals, social parties, work breaks, and other social interactions laced in leisure and relaxations. These are the comforts the rest of Nigerian Christians enjoy at every yuletide.

But on the reverse side, our gallant troops combating Boko Haram insurgency in the Northeast are painfully deprived of these liberties on account of official duties. We must know that special and catchy festive days like Sallah, Christmas and New Year celebrations are auspicious days insurgents love to strike to disrupt the pleasure such days stimulate in the citizens.

Terrorists consciously plot and embark on atrocious acts that would replace the pleasure and happiness with sorrows and agonies. It has been the tradition and in the past, and insurgents had always succeeded. But today, the vigilance and combative dexterity of our troops has truncated such terrorists’ atrocities on the people.

And in the Northeast, Boko Haram terrorists were very active in the last week preceding Christmas. They schemed to overwhelm our troops with serial strikes to prepare fertile grounds to unleash the final onslaught on Nigerians on Christmas day. But our brave troops never gave them a chance.

On Christmas eve, while our mothers, wives, aunties and the likes were making last minute shopping for the Christmas or cooking favourite delicacies for us to celebrate the festivity, our troops were in the tranches battling insurgents. Back home, their wives and mothers also prepared same sumptuous meals, but the soldier was nowhere the warmth of home to savour the dishes.

And these tales are far from fiction, but reality. On Christmas eve, the hour most of us had started our Christmas holiday in cozy homes or leisure spots, our troops fought and repelled terrorists attack on Forward Operational Base at Kukareta in Damaturu LGA. It was after troops had earlier successfully overpowered insurgents who ambushed them along the Maiduguri-Damaturu highway after a fierce battle.

And our troops have continued with this vigilance. On Boxing Day, we sent gifts to our beloved ones. But the soldier on the battle front never received any gift from us and not even a word of appreciation. Many of us never remembered that these soldiers have families; we were not encouraged by the spirit of the festivity to either visit or extend a gift to these families.

I searched Facebook and there were very little Christmas goodwill messages for our troops. But we extended same to people and institutions. This is not forgetfulness, but a deliberate act of taciturnity toward our troops.

But the soldiers are there; out in the cold winds of this season, eating regimental dishes; instead of what he would have loved to eat at any given time, like we freely select our menus every day and time. Yet, we have no feeling for them even on special occasions like Christmas.

We must search ourselves inwards; we should expand our reflections and dispassionately assess the counter-insurgency operations against Boko Haram terrorists, mounted by the Nigerian military, especially the Nigerian Army. The truth about the positive impact will ceaselessly stare us in the face.

No Nigerian can convince himself sincerely that he is not excited with the Army’s stoppage of bomb explosions in Abuja or any other part of the North as obtainable before now. Even if we pretend, it is incontestable that the Army under the command of the COAS and leader of the counter-insurgency operations, Lt. Gen. TY Buratai have reduced Boko Haram operations to confined obscure areas in the Northeast.

It cannot be disputed that the Army have performed marvelously. Those in doubt should ask other countries of the world which are under the spell of terrorism. It’s tough and nightmarish. Victory against insurgency is not earned so cheaply. But the Nigerian Army has continued to prove its might against terrorists.

I have no doubt that for every day Nigeria and the citizenry enjoy peace, there are people out in the trenches working tirelessly to entrench this peace and security. The Nigerian military and other security agencies who are anchoring this great altruistic national service for peace and enhanced security in our country and for our sake, deserves our acknowledgment and appreciation.

Our spirit of togetherness is not yet broken and when we collectively support our Armed Forces, Boko Haram insurgents cannot triumph over us. Let’s re-order the direction of our perceptions and begin to look at the soldier on the battlefront as our son, brother, husband and symbol of the Christ-like motif, which has offered the plank for the peace and security of our dear country.

Murphy, a security expert, sent this piece from Calabar

TWITTER @thecableng
Copyright 2020 TheCable. All rights reserved. This material, and other digital content on this website, may not be reproduced, published, broadcast, rewritten or redistributed in whole or in part without prior express written permission from TheCable.
Tags
alex badehrebuttalsuspect's confessiontrending video
Advertisement