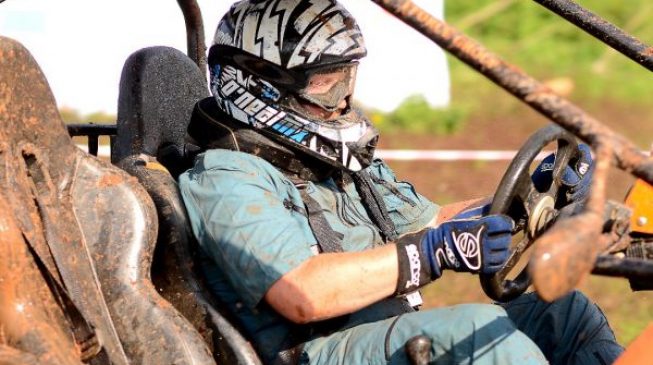 21:22 2019
Print This Article Share it With Friends
👤by Afolabi Gambari  0 Comments
Advertisement

Argo Raak of Estonia clinched the winning prize at the 3rd Ondo State Auto Rally which ended in Akure on Sunday.

The annual race was organised by Motorsports group ‘Work and Play’ at Ilara-Mokin and paraded some of the best off-road racers in the country.

Raak’s off-road buggy had sensationally crashed to deny him a podium chance at the last edition.

But his effort this time got him the N500,000 top prize after winning with 2:52:25 minutes in five laps, setting a five-lap record for buggies on the newly launched track.

Kurdyasv Eugene lurked in sub 16 seconds (at 3: 08:06) to place second, leaving Ralp Tupas and Kingsley Uwatse for the third and fourth places respectively.

The duo of Femi Dada and Richard Ike, who had hoped to impress, went home with no prize.

“I have prepared well for this edition, practicing for two months, and I am delighted to return the best time,” Raak said after being declared winner.

Adeoye Ojuoko, president of the ‘Work and Play, said this year’s edition was tailored to international standard.

“This edition was quite different because we have a well-established off-road challenge that was well controlled and which minimized all forms of risk as well as tailored to international standard. The new track is for racers willing to test their endurance, patience and focus,” he said.

Babatunde Fashola, minister of works and housing, and Micheal Adeojo, chairman, Elizade Nigeria Limited, were among the guests at the event.

Fashola, who commended the organizers, enjoined the competitors to embrace fairness while Adeojo urged youth in Nigeria to engage in positive activities that could promote development of the country.

The 4th edition of the rally is billed for April 2020.

TWITTER @thecableng
Copyright 2020 TheCable. All rights reserved. This material, and other digital content on this website, may not be reproduced, published, broadcast, rewritten or redistributed in whole or in part without prior express written permission from TheCable.
Tags
3rd Ondo State Auto RallyArgo RaakEstonia
Advertisement