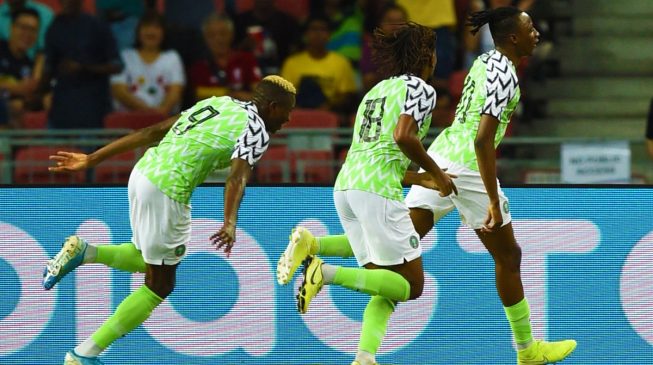 15:55 2019
Print This Article Share it With Friends
👤by Remi Sulola  0 Comments
Advertisement

Super Eagles of Nigeria held Brazil to a 1-1 draw in an international friend game at the Singapore national stadium, Kallang on Sunday.

The Eagles endured early time of pressure from the Brazilian side with their 4-3-3 formation.

Gernot Rohr’s side had finished third at this summer’s Africa Cup of Nations, losing in the semi-finals to Algeria, who went on to beat Senegal in the final.

The Eagles were also hit by a number of withdrawals from their squad, leaving Rohr without Oghenekaro Etebo, Kenneth Omeruo, Ola Aina and Samuel Kalu.

The Nigerian team, however, took the lead after Joe Aribo masterfully latched on to a fine pass from Moses Simon before twisting two players and scoring in the 35th minute.

The Samba Boys, who enjoyed possession in the first half, drew level after Casemiro scored three minutes into the second stanza.

Twelve minutes after Casemiro’s equalizer, the Real Madrid danger man almost grabbed another goal for Brazil but his header hit the crossbar.

Maduka Okoye made his debut for the Eagles as he came on to replace injured Uzoho in the 63rd minute.

Rohr also made changes as the Super Eagles fought to take the lead but the Brazilians managed to keep the game level.

The game was part of Nigeria’s preparations for the upcoming African Cup of Nations qualifying match against Benin Republic which will be played on November 14.

TWITTER @thecableng
Copyright 2020 TheCable. All rights reserved. This material, and other digital content on this website, may not be reproduced, published, broadcast, rewritten or redistributed in whole or in part without prior express written permission from TheCable.
Tags
BrazilDani AlvesFrancis UzohoMaduka OkoyeNeymar JrRamon AzeezSuper EaglesWilfred Ndidi
Advertisement

Mbaka: Uzodinma’s is just one… 39 of my prophecies for 2020 will come pass

Siasia: I’ve raised only $275 on GoFundMe to appeal FIFA ban