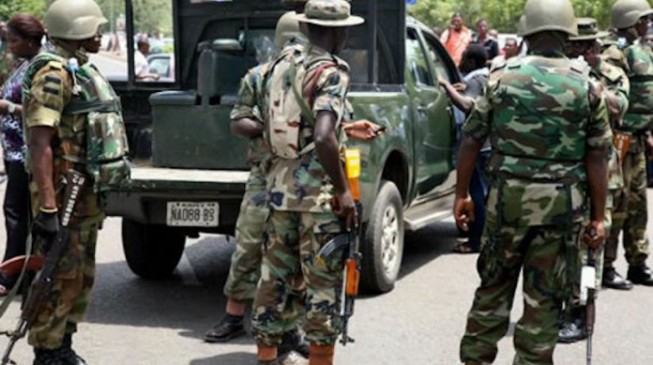 17:53 2019
Print This Article Share it With Friends
👤by Ebunoluwa Olafusi  0 Comments
Advertisement

The Nigeria army says its troops have arrested Shehu Jatau, a militia gang leader, and five of his accomplices at a hotel in the central area of the federal capital territory, Abuja.

Aminu Iliyasu, army operations media coordinator, said Jatau and his gang members are believed to be the masterminds behind some kidnappings and robberies in the FCT.

In a statement, the army said preliminary investigations showed that the suspects were involved in a recent Plateau state crisis and moved to Abuja to resort to “kidnapping, extortion and unleashing unprecedented carnage on residents”.

The statement added that the troops also rescued seven kidnapped victims from bandits in the Birnin Gwari area of Kaduna state.

“A notorious Tarok militia gang leader, Shehu Jatau and five of his accomplices were trailed and arrested in a hotel in the Central Area, Abuja,” the statement read.

“Preliminary investigation revealed that the suspects were very active in the unfortunate Plateau crisis that caused the lives of citizens and destruction of properties worth billions of naira.

“However, with the return of peace in the state, the criminal gang resorted to kidnapping, extortion and unleashing unprecedented carnage on innocent residents.

“Furthermore, troops of 2 Battalion, while on a routine patrol between Polewire and Gayam villages in Birnin Gwari LGA of Kaduna State, rescued seven kidnapped victims from a group of bandits.”

TWITTER @thecableng
Copyright 2020 TheCable. All rights reserved. This material, and other digital content on this website, may not be reproduced, published, broadcast, rewritten or redistributed in whole or in part without prior express written permission from TheCable.
Tags
ArmyarrestKidnap suspectsShehu Jatau
Advertisement