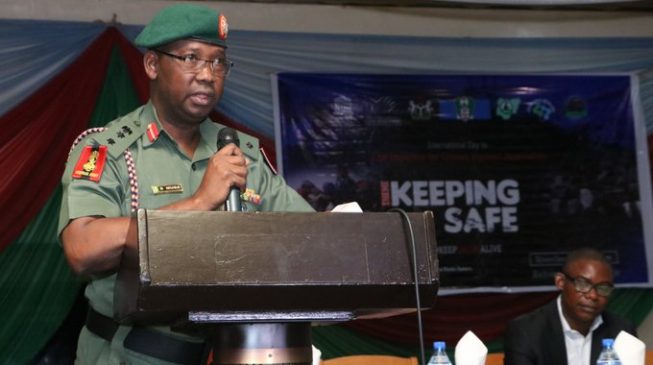 10:10 2019
Print This Article Share it With Friends
👤by Chinedu Asadu  0 Comments
Advertisement

The army said the incident did not happen in Nigeria, and that the video was doctored and released by the Indigenous People of Biafra (IPOB).

The video showed some men held hostage in an open field before being shot dead by the insurgents.

TheCable is yet to verify its authenticity.

But in a statement, Sagir Musa, army spokesman, said preliminary investigation showed the video was a tool of propaganda from IPOB.

“The Nigerian Army wishes to emphatically state that there was no incident that involved the capture and killing of tens and tens of Nigerian soldiers on the 10th of December 2019, as mischievously and wickedly portrayed in the video,” the statement read.

“Similarly, preliminary observation of the video clip (even by the amateur) will reveal that the video was doctored and that the event captured in the footage was not an occurrence that took place at any point in time within the shores of Nigeria.

“To this end, the Nigerian Army is hereby calling on members of the general public and, indeed, personnel of the Nigerian Army, especially those in the North East theatre of operation, to disregard the video concocted and peddled by the outlawed IPOB members.”

He added that the call by one Simon Ekpa who he said was the “principal actor in the clip”, on soldiers of south-east extraction to “return to Biafra proved it.”

“Also, the call on South Easterners not to join the Nigerian Army is an obvious indication of the essence and objective of the masterminds of this fake video which should be discountenanced by the public,” Musa said.

TWITTER @thecableng
Copyright 2020 TheCable. All rights reserved. This material, and other digital content on this website, may not be reproduced, published, broadcast, rewritten or redistributed in whole or in part without prior express written permission from TheCable.
Tags
boko haramIPOBNigerian Army
Advertisement