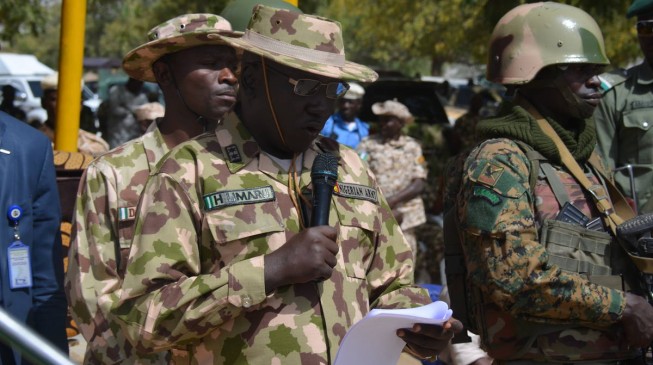 16:52 2019
Print This Article Share it With Friends
👤by Chinedu Asadu  0 Comments
Advertisement

The Nigerian army has released 25 children, including 23 boys and two girls, that were accused of having ties with Boko Haram insurgents.

The United Nations Children’s Fund (UNICEF) said it received the children on Thursday.

Human Rights Watch had reported that thousands of children were detained by the military for allegedly having links with Boko Haram members.

The latest release brings the number of children released this year to 44.

In a statement, Pernille Ironside, UNICEF acting representative in Nigeria, said the children have been deprived of their basic rights.

“These are children taken away from their families and communities, deprived of their childhood, education, health-care, and of the chance to grow up in a safe and enabling environment,” she said.

“UNICEF will continue working to ensure that all conflict affected children are reunited with their families, have hope of fulfilling their dreams and their human rights.”

Ironside said the children have been handed over to the Borno state ministry of women affairs and social development.

She added that the children will be kept at a UNICEF supported transit centre whilst efforts to reunite them with their families and reintegrate them back to their communities are underway.

“They will also access medical and psychosocial support, education, vocational training and informal apprenticeships, and opportunities to improve their livelihoods,” the UNICEF official said.

“We have made progress, but we would like to see all children suspected of involvement with armed groups, transferred out of military custody to the care of the relevant local authorities as quickly as possible to facilitate their return to their families and communities, spending minimal, if any, time in detention.

“As we commemorate the 30th Anniversary for the Convention of the Rights of the Child this year, we must collectively commit to do more for the protection, well-being and development of children in Nigeria, including by ensuring that they are not recruited or used in conflicts in the first place.”

UNICEF said a total of 2,499 people including 1,627 children have been cleared of suspected ties with non-state actors since 2016.

TWITTER @thecableng
Copyright 2020 TheCable. All rights reserved. This material, and other digital content on this website, may not be reproduced, published, broadcast, rewritten or redistributed in whole or in part without prior express written permission from TheCable.
Tags
ArmyBiko Haramchildren
Advertisement