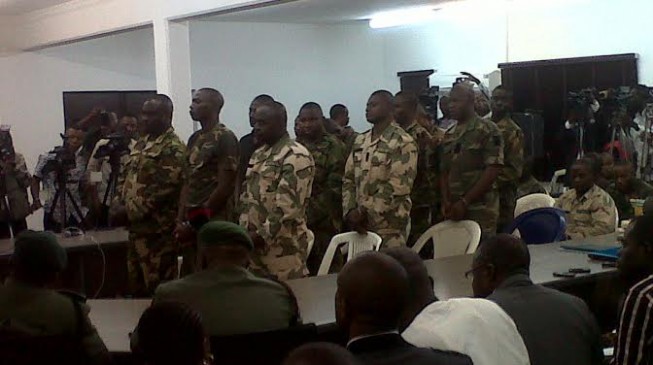 18:56 2019
Print This Article Share it With Friends
👤by News Agency  0 Comments
Advertisement

The 7 division of Nigerian Army in Maiduguri, Borno state, has inaugurated a general court martial to try 70 soldiers found wanting in the fight against Boko Haram insurgents.

Abdul Khalifa, acting general officer commanding (GOC) of the division, said the court was inaugurated in accordance with section 131(2) (d) of the armed forces act, CAP A20 LFN 2004.

He said the court would exercise its duties within the confines of the law and military regimentation principles.

“Acts of cowardice, desertion, un-soldierly and other forms of indiscipline has no place in any army executing war,” he said.

Khalifa said the aim is to encourage compliance with ethical standard and promote discipline to ensure successful implementation of military operations.

Enjoining the court members to be fair in discharging their duties, Khalifa added that principles of justice, equity and fairness would guide the proceeding of the court.

In June, Tukur Buratai, chief of army staff, had attributed some attacks on military bases to insufficient commitment of soldiers.

“It is unfortunate, but the truth is that almost every setback the Nigerian Army has had in our operations in recent times can be traced to insufficient willingness to perform assigned tasks or simply insufficient commitment to a common national and military course by those on the frontline,” he had said.

Editor’s note: This picture was used for illustration.

TWITTER @thecableng
Copyright 2019 TheCable. All rights reserved. This material, and other digital content on this website, may not be reproduced, published, broadcast, rewritten or redistributed in whole or in part without prior express written permission from TheCable.
Tags
court-martialNigerian Armysoldiers
Advertisement

Judge: I was deeply touched when I saw Maina on wheelchair

Judge: I was deeply touched when I saw Maina on wheelchair