Atiku’s son-in-law gave me $140,000 for Obasanjo before elections, says witness 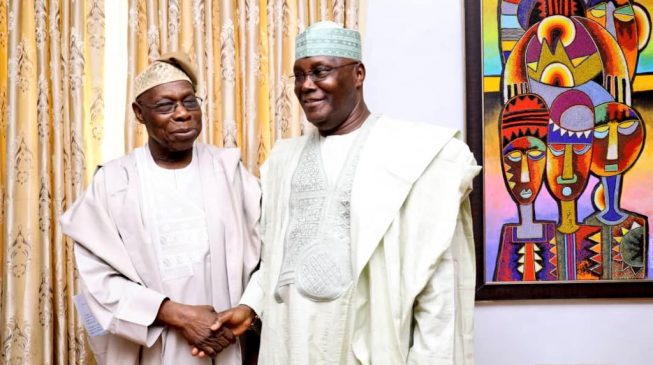 08:32 2019
Print This Article Share it With Friends
👤by Bolanle Olabimtan  0 Comments
Advertisement

Mohammed, who was the first witness presented by the Economic and Financial Crimes Commission (EFCC), described himself as a “close friend” of the accused.

Babalele was arraigned in August by the EFCC on two-count charge of money laundering.

The anti-graft agency accused him of laundering $140,000 in the build-up to the 2019 general election.

While being led in evidence by Rotimi Oyedepo, EFCC prosecutor, Mohammed detailed how he delivered the money to the former president at his residence in Ogun state.

Obasanjo endorsed Atiku, who was the presidential candidate of the Peoples Democratic Party (PDP), in the last election.

He said Babalele called him sometime in February, asking him to deliver a message to “an elder statesman”.

He said on Babalele’s request he supplied two bank accounts, which were credited with the said sum.

“When I got to the gate, somebody came and took me inside where I met former President Olusegun Obasanjo and delivered the message,” the witness said.

“I called the defendant in the presence of former President Obasanjo and informed him that I had delivered the message. He said that was good and thanked me.”

Under cross-examination by Mike Ozekhome, the defence counsel, Mohammed affirmed that he wrote a statement at the office of the EFCC during the investigation.

Ozekhome’s sought to tender the statement as an exhibit but was opposed by the prosecutor.

Chukwujekwu Aneke, the judge, adjourned the case till Wednesday to rule on the admissibility of the document.

TWITTER @thecableng
Copyright 2020 TheCable. All rights reserved. This material, and other digital content on this website, may not be reproduced, published, broadcast, rewritten or redistributed in whole or in part without prior express written permission from TheCable.
Tags
Abdullahi Babaleleatiku abubakarolusegun obasanjo
Advertisement