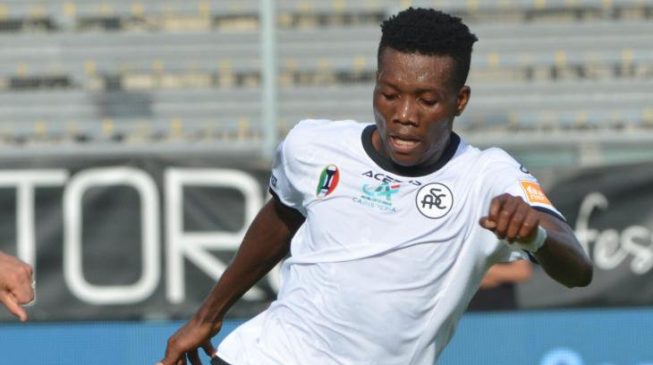 14:52 2019
Print This Article Share it With Friends
👤by Remi Sulola  0 Comments
Advertisement

Semi Ajayi and Eberechi Eze hogged the headlines among Nigerian players abroad over the weekend.

There were so many excellent performances from Nigerian players across the globe as some of the leagues are starting to take shape.

TheCable has more on how Nigerian players fared abroad over the weekend.

FC Liefering failed to win their second game of the Austrian 2.Liga season after playing out a 4-4 draw with SK Austria Klagenfurt at the Karawankenblick Stadion (Klagenfurt am Wörthersee) on Sunday. Junior Chukwubuike Adamu bagged a brace in the eight-goal thriller.

Yusuf Otubanjo watched the game from the stands as LASK thumped Austria Wien 3-0 at the Generali Arena.

Bright Edomwonyi featured for the hosts and was subbed off after the hour.

Emem Eduok was once again on song for Hadjuk Split as they dismissed Lokomotiv Zagreb 3-1.

Hilary Gong was a second half substitute for 10-man Vitesse who were forced to a 2-2 draw by defending champions Ajax Amsterdam in the Dutch Eredivisie.

Debutant Chidera Ejuke climbed off the bench to score in Heerenveen’s 4-0 annihilation of Heracles.

FC Tambov were pipped 1-0 at home by Arsenal Tula. Blessing “Benito” Olabiran was an unused substitute in the match. Nigerian born defender Adessoye Oyewole played the entirety of the match for Tambov.

Afeez Aremu’s Start moved to the second spot top of Norwegian 1. Division table with a 3-1 win over Kongsvinger on Sunday.

The youth international was named in the starting line-up and 77 minutes, as Johannes Thor Hardarson’s side ran riot at the Soer Arena.

In Finland, Taiye Taiwo lasted 90 minutes for RoPS, as they recorded a 2-2 draw at Ilves in the Veikkausliiga.

Striker Daniel Chima was once again on target for his club Heilongjiang Lava Spring FC who won 2-0 at Nantong Zhiyun FC.

Emmanuel Iyoha logged the entirety of the tie but Holstein Kiel suffered a 2-0 defeat at the hands of Darmstadt in the German Bundesliga 2.

Uche Ikpeazu’s Hearts suffered a 3-2 loss at the hands of Aberdeen in the Scottish Premier League. He provided two assists. Funso Ojo defended the colours of Aberdeen.

Veteran Nigerian striker Peter Utaka scored a brace for Ventforet Kofu in their 3-0 win over Machida Zelvia in J. League 2 on Sunday.

Emmanuel Dennis wasn’t left out in the fun as he also struck a goal for Club Brugge at the Jan Breydel Stadion.
At the Guldensporenstadion, Kortrijk forced Sporting Charleroi to a 1-1 draw. Imoh Ezekiel started the game and earned a 15th-minute booking. Abdul Ajagun was a second-half entrant.

Mechelen were ruthless in defeating KRC Genk 3-1. Young striker Stephen Odey made the 18-man squad and replaced John Painstil eight minutes from time. He had a goal attempt in the 85th minute.

Former Flying Eagles shot-stopper Sebastian Osigwe kept clean sheet as he side Kriens recorded a 2-0 win over Chiasso on Saturday.

Striker Ezekiel Henty got off to a flying start in the 2019/20 Hungarian NB 1 season as his club Puskas FC Academy shocked Ujpest 3-1 on Saturday.

Vincent Onovo and Obinna Nwobodo were on the losing train.

Debutant Semi Ajayi won the battle of Nigerians at the City Ground as West Brom claimed a 2-1 win over Nottingham Forest on Saturday.

Sammy Ameobi was in action for Nottingham Forest in the game.

Defender Moses Odubajo made his Sheffield Wednesday debut as the visitors opened the Sky Bet Championship season with a 3-1 win over lacklustre Reading on Saturday.

Striker of Nigerian descent Tammy Abraham scored as Chelsea ended their pre-season campaign with a 2-2 draw against Borussia Monchengladbach on Saturday afternoon.

Blackburn Rovers were beaten 2-1 by Charlton Athletic at Ewood Park. Adedeji Oshilaja was a 90th-minute substitute in the game. Tosin Adarabioyo wasn’t listed by Blackburn Rovers.

Over to Madejski Stadium, full back Moses Odubajo put in a full shift for Sheffield Wednesday as they humbled Reading 3-1.

QPR beat Stoke City 2-1. Eberechi Eze scored a goal while Bright Osayi-Samuel provided an assist for Rangers. Luke Amos was substituted in the second half with Olamide Shodipo coming off the bench.

In the League One, Rotherham United began their bid to return to the Championship with a 2-1 win against AFC Wimbledon.

Freddie Ladapo was on song for the visitors at the Cherry Red Records Stadium. Matthew Olosunde and Michael Ihiekwe also featured for Rotherham United.

Victor Adeboyejo failed to hit target for Bristol Rovers who lost 2-0 to Blackpool. He was subbed off for Tom Nicholls in the 85th minute.

John Akinde and Jordan Adebayo Smith were named on the subs bench in Lincoln City’s 2-0 victory at home to Accrington Stanley.

Akinde was trusted to the match and he delivered with a well-taken penalty kick. Smith was benched.

Fejiri Okenabirhie inspired Shrewsbury to a 1-0 success in front of their fans to Portsmouth.

Substitute Fred Onyedinma put the icing on the cake for Wycombe Wanderers in their 2-0 victory against Bolton Wanderers. Bulky striker Adebayo Akinfenwa provided the assist for Onyedinma.

In the League 2, Olufela Olomola hit the target for Carlisle United as they edged Crawley Town 2-1 at Brunton Park.

Leyton Orient beat Cheltenham Town 1-0, with James Alabi in action for the hosts.

Moses Ogbu climbed off the bench in the 90th minute for Grimsby Town who shocked Morecambe 2-0.

Elijah Adebayo put up a good shift for Walsall who won 1-0 at Northampton Town.

Abdul Zubairu put up a fine individual showing for AS Trencin, as they lost 2-1 to Zilina in the Slovakian Super Liga on Saturday.

Zubairu scored and lasted the full 90 minutes for AS Trencin. The loss sees Trencin drop to 10th in the top flight.

Barcelona product Godswill Ekpolo showed quality and suited up for the full duration in Haecken’s 4-1 demolition of Sirius.

Former Shooting Stars and Enyimba defender Chima Akas played the full 90 minutes for Kalmar as they were held by 10-man Hammarby to a 2-2 draw.

Aliyu Abubakar made his 2nd appearance of the season for nine-man Olimpik Donetsk, as they lost 1-0 to 10-man FC Kolos Kovalivka on Sunday afternoon. Aliyu Abubakar was sent off in the game.

TWITTER @thecableng
Copyright 2020 TheCable. All rights reserved. This material, and other digital content on this website, may not be reproduced, published, broadcast, rewritten or redistributed in whole or in part without prior express written permission from TheCable.
Tags
Eberechi EzeMoses OdubajoSammy AmeobiSemi AjayiSport
Advertisement