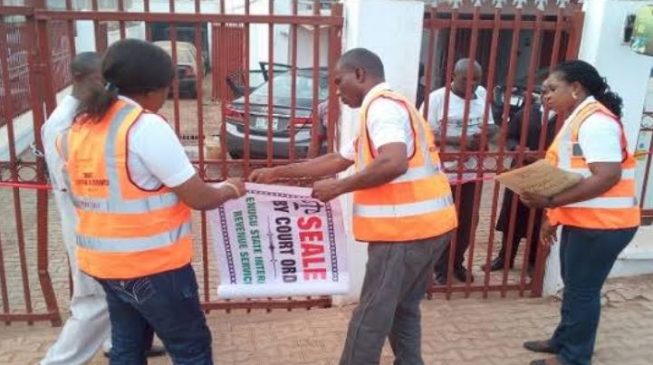 10:02 2019
Print This Article Share it With Friends
👤by News Agency  0 Comments
Advertisement

The Enugu state government says it will seal off 3,000 properties across the state for alleged tax evasion.

Emeka Odo, chairman of the State Internal Revenue Services (SIRS), told journalists on Friday that SIRS’ year-end enforcement on alleged recalcitrant tax defaulters will result in sealing off the premises of 37 institutions.

The chairman said the 3,000 institutions owe the state government debt of N2.5 billion.

“This exercise, which is still ongoing, involves the distrainment of a number of commercial establishments, banks and some private institutions,” he said.

“They have refused to remit to the state government taxes they deducted from clients, staffers and others.

“This exercise is pursuant to an ex-parte order from the High Court of Enugu State. It is expected that over 3,000 property will be affected by the work of the receiver managers.”

However, some owners of the property that were sealed off faulted the process and claimed that they did not owe.

For instance, Anthony Ifechukwu, the proprietor of Utopia Suites and Apartments, Independence Layout, Enugu, told NAN that the enforcement would kill businesses.

According to him, he has fulfilled his financial obligations to the state government and there is no need to seal off his business premises.