BBOG: Boko Haram not defeated until all Chibok girls are rescued — according to Buhari 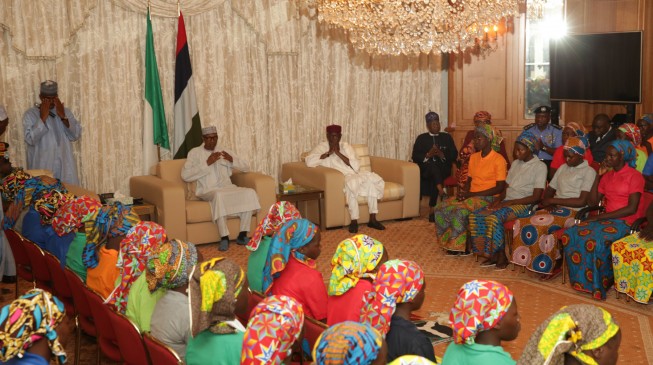 06:50 2018
Print This Article Share it With Friends
👤by Dyepkazah Shibayan  0 Comments
Advertisement

The Bring Back Our Girls (BBOG) movement says the claim by the army to have defeated the Boko Haram insurgent group is a distraction.

In a statement on Wednesday, Sesugh Akume, spokesman of the BBOG, said President Muhammadu Buhari made the rescue of Chibok girls and persons in captivity as the “benchmark” for defeating Boko Haram.

The BBOG statement read: “This claim of ‘completely’ defeating the terrorists and their holding no territory by the Nigerian army in the President Buhari administration, it would be recalled was since October 2015.

“In his inauguration speech on May 29, 2015, President Muhammadu Buhari stated that ‘. . . we cannot claim to have defeated Boko Haram without rescuing the Chibok girls and all other innocent persons held hostage by insurgents.’

“This is the benchmark for defeating the terrorists as stated by the commander-in-chief himself. Any other claim aside from this is not only dishonest but tends towards insubordination.

“Our movement once again avers that the propaganda and triumphalism engaged in by the military could be constituting a distraction from the important task of indeed winning the counterinsurgency/counterterrorism effort, returning our #ChibokGirls and others in captivity, and returning peace to the northeast whereby hapless IDPs may return home to start putting their lives together.”

In a video clip recently released, Abubakar Shekau, leader of Boko Haram, said the army lied that it had defeated the insurgent group.

TWITTER @thecableng
Copyright 2019 TheCable. All rights reserved. This material, and other digital content on this website, may not be reproduced, published, broadcast, rewritten or redistributed in whole or in part without prior express written permission from TheCable.
Tags
Abubakar ShekauBBOGchibok girlsMuhammadu Buhari
Advertisement