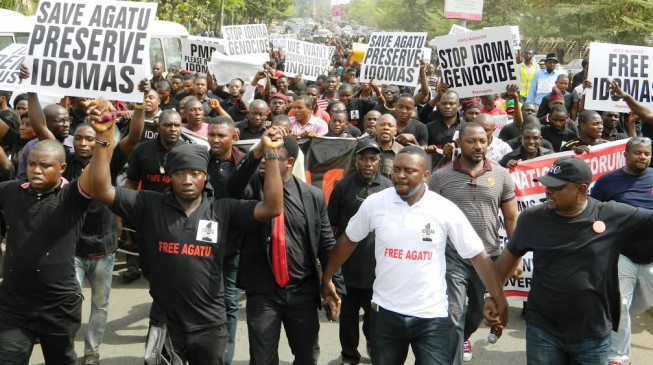 19:06 2019
Print This Article Share it With Friends
👤by TheCable  0 Comments
Advertisement

The Miyetti Allah Kautal Hore has apologised to Samuel Ortom, governor of Benue state, for the attacks and killings in the state caused by herdsmen.

Saleh Alhassan, the association’s national secretary, tendered the apology on Saturday at a peace meeting in Makurdi and pledged to ensure peaceful coexistence between farmers and herdsmen in the state.

According to a statement issued at the end of the meeting, the meeting was initiated by Allen Onyeama, the chairman of Air Peace airline.

“The Miyeitti Allah scribe described Governor Ortom as a peace-loving man who stood firmly for the emancipation of his people,” the statement, which was signed by Terver Akase, Ortom’s chief press secretary, read.

“Alhasan gave assurance that members of the group would embrace the peace initiatives put forward by the Governor.”

During his speech, Ortom said the Open Grazing Prohibition and Ranches Establishment Law was enforced as a way of ending the killings and encourage ranching as the global best practice of animal husbandry, not to cause any crisis.

The governor assured that the law protects farmers and livestock farmers adding that any person or ethnic group can acquire land in the state to rear livestock.

Onyema said he personally brought Alhassan to the meeting because of the need for a peaceful cohabiting of farmers and herders in Benue state.

Various towns in Benue, including Agatu, were affected by the clashes.

TWITTER @thecableng
Copyright 2019 TheCable. All rights reserved. This material, and other digital content on this website, may not be reproduced, published, broadcast, rewritten or redistributed in whole or in part without prior express written permission from TheCable.
Tags
Allen OnyeamaMiyetti AllahSamuel ortom
Advertisement