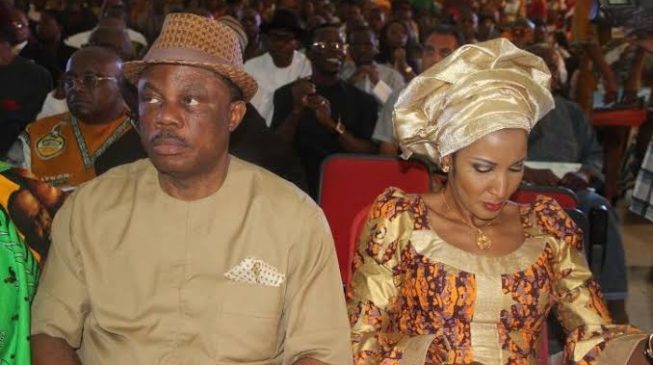 22:17 2019
Print This Article Share it With Friends
👤by News Agency  0 Comments
Advertisement

Bianca, widow of Chukwuemeka Ojukwu, has expressed dissatisfaction with the absence of Willie Obiano, governor of Anambra state, at the second memorial lecture of her late husband.

Speaking at the Chukwuemeka Odumegwu Ojukwu University (COOU) Igbariam, Anambra, on Monday, Bianca told Nkem Okeke, deputy governor of the state, who represented Obiano at the event, that there was no evil spirit at the venue.

She was taunting the governor over his recent comment that there were evil spirits at government house, Awka, Anambra.

Bianca, who spoke shortly after Kingsley Muoghalu, a former deputy governor of Central Bank of Nigeria (CBN), said Obiano was one of the greatest beneficiaries of Ojukwu’s legacy.

“Tell Obiano that there is no evil spirit in the venue of Ojukwu memorial lecture. This is the second time the event is holding and Obiano doesn’t want to attend by himself,” Bianca said.

She called on the governor not to erode the legacy of her late husband especially regarding All Progressives Grand Alliance (APGA).

“Lastly, tell him that he is gratuitously handing over the credentials for history to call him an ingrate, who step on fingers of all the benefactors that held the ladder for him to climb to political power,” she said.

She thanked Peter Obi, a former governor of the state, for renaming the university after Ojukwu whom she described as a hero in life and death.

“It is unfortunate that Obiano has not attended the memorial lecture since it started last year, but that is not to say that he will not attend. The governor still has time in office and could still attend in future,” he said.

Moghalu, whose lecture was titled: “Ndigbo in the contemporary Nigerian politics, problems, prospects and way forward”, said the Igbo people must be given equal treatment like other ethnic groups.

He said the effect of the Nigeria/Biafra civil war is still holding the the nation backward.

“I suggest that key actors during the war like retired Gen. Yakubu Gowon should speak to heal the wounds to ensure lasting peace,” he said.

Ike Ekweremadu, former deputy senate president, who chaired the event called for restructuring of the country and introduction of state police.

He said restructuring and de-centralisation of the police were key to addressing the mirage of problems plaguing the nation.