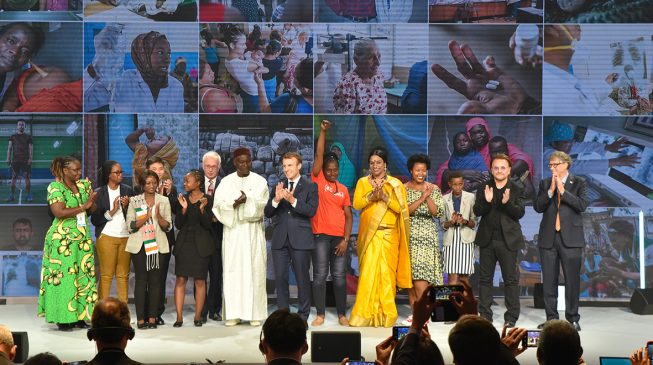 00:19 2019
Print This Article Share it With Friends
👤by Mayowa Tijani  0 Comments
Advertisement

The government of France, led by President Emmanuel Macron; the Bill and Melinda Gates Foundation, represented by Bill Gates; the US government and other Global Fund donors have pledged $14.02 billion to end malaria, HIV/AIDS and tuberculosis by 2030.

This is the biggest amount ever raised for a multilateral health organization, and the largest amount by the Global Fund.

For context, this is more than the entire wealth of Aliko Dangote, Africa’s richest billionaire, who was estimated by Forbes to worth $10.4 billion in 2019.

According to Global Fund, the funds will help save 16 million lives and end the epidemics of AIDS, tuberculosis and malaria by 2030.

Peter Sands, Global Fund chief executive, had initially annouced the optimistic target of $14 billion, which was going to be far above what most donors had budgeted.

But President Macron called on donors to increase their commitments by at least 15 percent, as he raised France’s donation by 20 percent to $1.42 billion – $60 million more than previously announced.

The US Congress approved a commitment to give a total of $4.7 billion over three years, while Britain — despite Brexit challenges — pledged £1.4 billion, a 16% increase from initial budget.

Global Fund also said private donors pledged more than $1 billion for the first time ever, an extraordinary achievement led by the Bill & Melinda Gates Foundation’s pledge of US$760 million.

During the fundraiser hosted by the French government in Lyon, Gates, co-chair of the Bill and Melinda Gates Foundation, said “Today’s Global Fund replenishment result is an incredible achievement”.

“This is a big day in the history of AIDS, tuberculosis and malaria – and one that no one expected two decades ago when the diseases were at their peak.

“Thank you to all the donors who increased their contributions. We hope others are inspired to follow their lead and support the Global Fund to continue its life-saving work.”

Major recipients of the fund will be Nigeria, Tanzania, the Democratic Republic of the Congo, Mozambique and Zimbabwe — where the issues being addressed are prevalent.

Global Fund and its donors believe that a world free of malaria, HIV, and tuberculosis is possible, and they add that they are working with development partners across the world to achieve that by 2030.