Boateng stunner sinks City as Chelsea are held at home 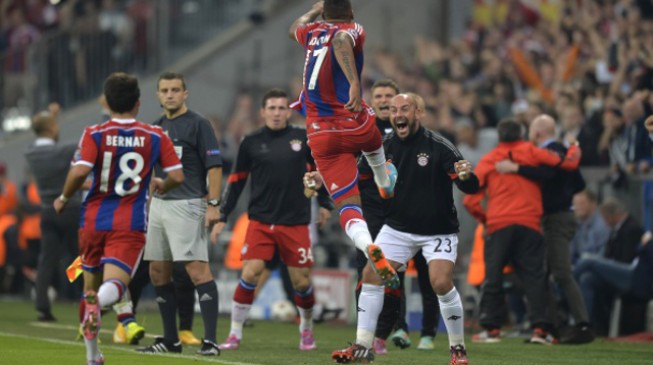 09:39 2014
Print This Article Share it With Friends
👤by Victor Akhidenor  0 Comments
Advertisement

Manchester City were cruelly undone by a stunning Jerome Boateng strike in the dying moments of their Champions League opener against German champions Bayern Munich on Wednesday.

City had looked certain to secure a credible away draw away until their former player’s 90th-minute goal saw their hard work come to nothing.

As the game progressed, Bayern were visibly growing frustrated with their inability to beat Joe Hart and they resorted to loose passes, direct play and long-distance shots much to the delight of Manuel Pellegrini and his players.

Arjen Robben did his image no favours after a blatant dive in the City box, thankfully referee Alberti Mallenco didn’t point to the spot and dished no punishment out either.

But in the 90th minute, City failed to clear their lines from a corner and Boateng capitalised by sweetly striking the ball beyond Hart.

City will now face Roma at home on September 30, a game they have to garner the maximum points from if they hope to progress to the next round much less win the group like captain Vincent kompany has been saying.

The Italians defeated CSKA Moscow 5-1 in the other group game.

Barcelona continued their perfect defensive start to the season with their fourth straight clean sheet in a 1-0 victory over APOEL.

Despite dominating the match from the blast of the whistle, Barcelona struggled to break down APOEL’s stubborn nine-men-behind-the-ball defence.

But the goal finally arrived in the 28th minute when Lionel Messi sent a free kick into the middle of the APOEL area that floated over everyone, arriving in the ideal spot as Gerard Pique squeezed through the defence. The defender got his head on the ball and powered it past Ukro Pardo to give the home side a 1-0 lead thatproved the only goal of the match.

Ajax and Paris Saint-Germain settled for a 1-1 draw in the other game in the group.

The Blues started the game strongly, with Ramires going close with a shot just minutes after the kickoff.

However, it was Fabregas who gave his team the lead with a smart finish in the 11th minute after latching on to a pass from Eden Hazard.

The former Barcelona player had a chance to double his tally but fired his effort over the Schalke bar.

Didier Drogba missed a good opportunity to extend the lead before Schalke countered and Huntelaar  shot past Thibaut Courtois to level.

Substitute Loic Remy almost put Chelsea back in front but Roman Neustadter was there to clear off the line before Hazard fired a shot over the crossbar.

The Blues’ next game in Europe is away to Sporting Lisbon, who played a 1-1 draw away to Maribor.

A Sergei Chernik blunder gifted Porto the lead after five minutes, with the goalkeeper’s misplaced throw allowing Brahimi to shoot into the net.

The Algerian winger got another in the 32nd after a magnificent solo run, before Jackson Martinez scored with a header at the front post in the 37th minute.

Brahimi curled a free kick over the wall for his third in the 57th. Adrian Lopez in the 61st and Vincent Aboubakar in the 76th completed the rout.

Elsewhere in the group, Athletic Bilbao and Shakhtar Donetsk played a goalless draw in Spain.