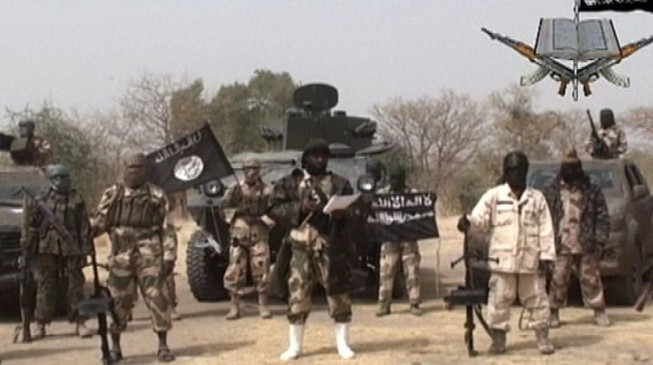 18:39 2014
Print This Article Share it With Friends
👤by Taiwo George  0 Comments
Advertisement

Boko Haram militants have taken over a riot police training academy around Gwoza, 160 kilometres away from Maiduguri, capital of Borno state, the BBC reported on Thursday.

The militants reportedly arrived in three armoured vehicles and dozens of motorcycles and fired sporadic gunshots in the air, before blowing up an armored tank at the gate of the training camp in order to gain entrance into the place.

Gwoza has come under heavy attacks from the sect in the past few weeks. Up till date, it has not been confirmed if the traditional leader of the town is dead or alive, as he was declared missing after an attack carried out by Boko Haram.

The emir, whose reign on the throne is just a little over two months, succeeded his father who also got killed by the sect on May 30.

Meanwhile, there are reports that the insurgents have also taken over and hoisted their flags in strategic places across Buni Yadi, a town in Guja local government area of Yobe state, where they killed 59 students of a federal government college in the town in February.

Residents of the town have been forced to relocate to Damaturu, the state capital.

Government facilities and security operatives in different communities particularly in the three north-eastern states currently under the state of emergency have been the targets of the sect.

TWITTER @thecableng
Copyright 2020 TheCable. All rights reserved. This material, and other digital content on this website, may not be reproduced, published, broadcast, rewritten or redistributed in whole or in part without prior express written permission from TheCable.
Tags
boko haramborno stateBuni Yadi attack on 59 federal governmentGwozaInsurgency in NigeriaPolice training Academystate of emergencyYobe State
Advertisement