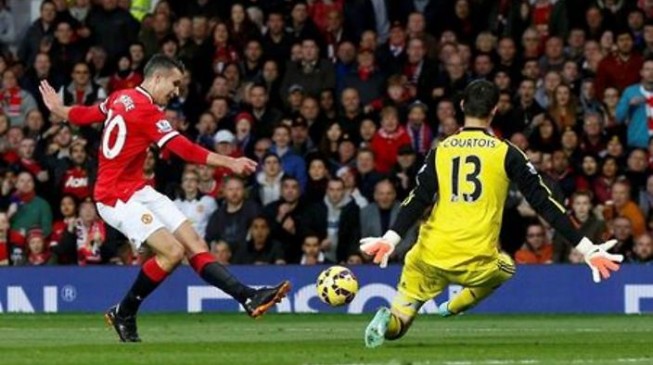 20:15 2014
Print This Article Share it With Friends
👤by Victor Akhidenor  0 Comments
Advertisement

The visitors looked all but certain to go away with the three points until a late twist in the fourth minute of added on time ensured that the spoils were shared.

The first chance of the game fell to Angel di Maria, but he failed to keep his volley down after being picked out by Juan Mata, with the ball flying over the bar.

Van Persie was the next United player to try his luck on goal after latching onto Adnan Januzaj’s incisive pass before getting away a shot that was well kept out by Thibaut Courtois.

Chelsea hit their opponents on the break, as the game edged towards half time with Willian leading the charge. He raced past Marcos Rojo but failed to get the better of Chris Smalling who made a vital block.

David De Gea was forced into action shortly after to push away Didier Drogba’s low effort, ensuring that the scoreline remained goalless at the break.

Eight minutes after the restart, Drogba put his side ahead, flicking a header into the back of the net just moments after De Gea had produced a fine save to deny Eden Hazard who was through on goal.

Branislav Ivanovic almost doubled the lead when he weaved through the United defence, but could not find the target at the end of his run.

The match looked to be beyond the Red Devils, until Van Persie converted from a corner in the fourth minute of added on time to rescue a point for the hosts.

The Cameroonian grabbed an early lead for the Toffees with a powerful header but Danny Ings levelled matters soon after.

Lukaku restored the lead on the half-hour mark and despite Burnley’s effort, Everton were not in the mood of relinquishing the lead.

Eto’o sealed the win four minutes from time with a superb strike from distance.

The post denied the Cameroonian a hat-trick in added time but the three points, which moves Everton up to ninth in the table, were already confirmed.

Burnley remain second-from-bottom and still searching for their first win since returning to the top flight.

At White Hart Lane, Sammy Ameobi and Ayoze Perez scored their first Premier League goals as Newcastle came from behind to beat Tottenham 2-1.

The Magpies are up to 14th place in the table after recording only their second top-flight win of the season, while Spurs drop to 11th.

Emmanuel Adebayor put the host in front in the 18th minute with his first goal since August.

Pardew threw on Ameobi and Remy Cabella at the start of the second half  and within eight seconds of kick-off, Jack Colback sent the ball through for Ameobi to latch onto and he finished brilliantly across Hugo Lloris.

Then on 58 minutes, the home fans were stunned into silence as Perez rose to head in Cabella’s cross to put the away side ahead.

Despite late pressure from Spurs, the visitors held on to take all three points.

TWITTER @thecableng
Copyright 2020 TheCable. All rights reserved. This material, and other digital content on this website, may not be reproduced, published, broadcast, rewritten or redistributed in whole or in part without prior express written permission from TheCable.
Tags
Barclays Premier LeagueChelseaDidier Drogbamanchester unitedRobin van Persie
Advertisement

S’court: Why we accepted materials tendered by Uzodinma, police