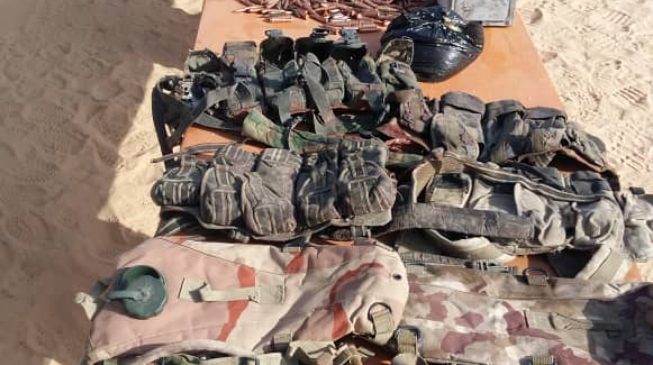 16:42 2019
Print This Article Share it With Friends
👤by Femi Owolabi  0 Comments
Advertisement

An army commander and at least 20 soldiers have been killed in an ambush by Boko Haram insurgents in Yobe state.

The troops were ambushed on their way from Borogozo in Yobe where the headquarters of the army’s 29 task force brigade to Benisheikh in Yobe, where they have a forward operating base (FOB).

A military source in sector 2 headquarters of operation Lafiya Dole told TheCable that the incident happened around 6pm on Wednesday.

“They were on their way to Benisheikh when they ran into the enemy. The commander of that brigade, a colonel, and about 20 soldiers were killed,” he said.

A reinforcement was reportedly sent to the town and it was confirmed that the brigade commander had been killed.

Among the bodies reportedly identified were that of a captain and four soldiers. Their bodies have since been moved to the 7 division hospital in Maiduguri, Borno state capital.

Sources said one of the soldiers who escaped the ambush has returned to the base in Benisheikh.

In June, at least 28 soldiers were reportedly killed while the insurgents ransacked a military base in Gajiram, Nganzai local government area of Borno.

Musa Sagir, army spokesman, had not responded to a text message sent by TheCable as of the time this report was filed.

TWITTER @thecableng
Copyright 2020 TheCable. All rights reserved. This material, and other digital content on this website, may not be reproduced, published, broadcast, rewritten or redistributed in whole or in part without prior express written permission from TheCable.
Tags
boko haramNigeria Army
Advertisement