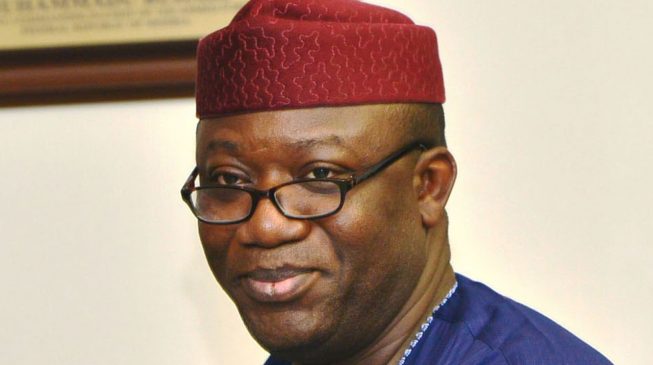 21:52 2018
Print This Article Share it With Friends
👤by Femi Owolabi  1 Comment
Advertisement

The former governor of the state secured the most votes in the rescheduled exercise held on Saturday.

Fayemi took a total of 941 votes, which put him a mile ahead of other aspirants.

Tanko Al-Makura, governor of Nasarawa state and chairman of the committee overseeing the electoral process, had confirmed that 2, 327 delegates were accredited for the exercise.

Adekunle Patrick was the only aspirant without a vote while Ajayi Adebowale Oluranti and Elizabeth Taiye had one each. Coker Olumuyiwa, Olumilua Olumuyiwa, Ajayi Olatunji and Ayodele Arise secured two votes apiece.

Despite withdrawing from the race, Babafemi Ojudu still managed to get 10 votes.

The election was disrupted last Saturday by some party agents who alleged that the exercise was fraudulent.

The winner, Fayemi, is from Isan-Ekiti in Oye-Ekiti local government area of the state.

How the top five fared

TWITTER @thecableng
Copyright 2020 TheCable. All rights reserved. This material, and other digital content on this website, may not be reproduced, published, broadcast, rewritten or redistributed in whole or in part without prior express written permission from TheCable.
Tags
APCEkitikayode fayemi
Advertisement