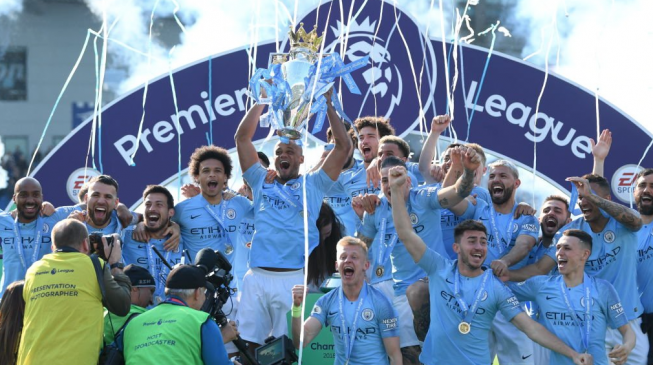 16:44 2019
Print This Article Share it With Friends
👤by Remi Sulola  0 Comments
Advertisement

Pep Guardiola’s men clinched the EPL title with a 4-1 victory over Brighton at the Amex stadium on Sunday in an unprecedented title race.

Man City now becomes the first team to retain the title back-to-back since Manchester United a decade ago.

But City restored parity at the top of the table, thanks to goals by Sergio Aguero and Aymeric Laporte in the 28th and 38th minutes respectively.

In the second half, Riyad Mahrez netted the third goal for City in the 64th minute.

Ilkay Gundogan curled an emphatic free-kick into the top corner for City’s fourth goal in the 72nd minute.

They are now one game away from becoming the first English team ever to do the domestic treble as they face Watford in the FA Cup final on May 18.

The last team to be top, going into the final day of an English top-flight season, and not winning the title were Liverpool in 1988-89.

The Reds’ long drought continues as they have never won the title in the Premier League era.

Six teams have won the Premier League since its inception in 1992.

Manchester United have won it the most – 13 times under Sir Alex Ferguson.

The other winners are Blackburn Rovers (one title), Arsenal (three), Chelsea (four), Manchester City (three) and Leicester City (one).

TWITTER @thecableng
Copyright 2020 TheCable. All rights reserved. This material, and other digital content on this website, may not be reproduced, published, broadcast, rewritten or redistributed in whole or in part without prior express written permission from TheCable.
Tags
2018/19 EPL seasonAmex StadiumAymeric LaporteBrighton Albion and HovesJurgen KloppLiverpoolManchester CityPep Josef GuardiolaRiyad MahrezSergio AgueroSport
Advertisement