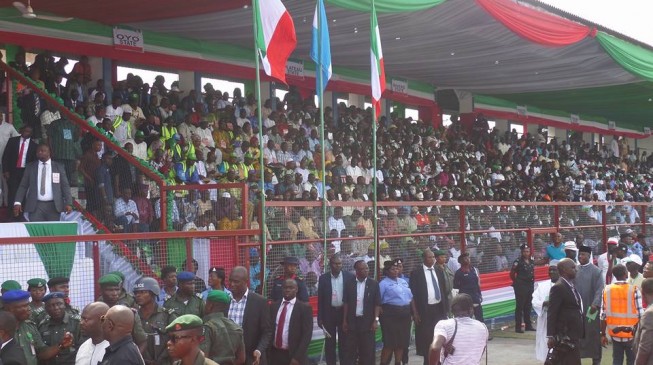 13:26 2016
Print This Article Share it With Friends
👤by Fredrick Nwabufo  0 Comments
Advertisement

The Peoples Democratic Party (PDP) has cancelled its national convention in Port Harcourt after a siege on the venue of the event by the police.

An official of the party confirmed this development to TheCable on Wednesday.

The national executive of the party was to be elected at the convention, but that did not happen. Instead, the tenure of the caretaker committee leby by Ahmed Makarfi was extended.

He said the tenure of the committee had been extended for one year, and that a new date would be scheduled for a fresh convention.

‎The PDP had held a convention in May, but a disagreement between some of ‎ the party’s leaders and Ali Modu Sheriff, a factional leader of the party, scuttled the exercise.

At the botched May convention, Makarfi was appointed to head a caretaker committee of the party, and the committee was given three months to hold another convention to elect a new national executive.

However, Wednesday’s convention did not take place as police sealed off the venue following a court order. ‎There had been judgment somersaults over the leadership of the party.

While a federal high court in Port Harcourt recognises Makarfi’s committee as the legitimate head of the PDP, another court of coordinate jurisdiction in Abuja recognises Sheriff as the leader of the party.

TWITTER @thecableng
Copyright 2020 TheCable. All rights reserved. This material, and other digital content on this website, may not be reproduced, published, broadcast, rewritten or redistributed in whole or in part without prior express written permission from TheCable.
Tags
conventionPDP
Advertisement