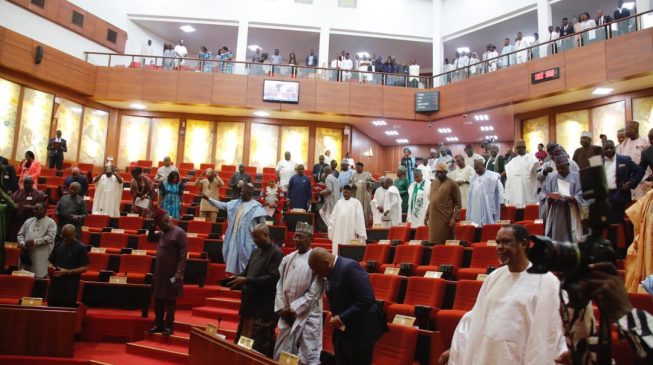 13:12 2019
Print This Article Share it With Friends
👤by Dyepkazah Shibayan  0 Comments
Advertisement

A bill seeking to regulate social media has passed second reading at the senate.

The bill entitled, ‘Protection from Internet Falsehood and Manipulation 2019’, passed second reading after Sani Musa, senator representing Niger east and its sponsor, moved a motion for a debate on the proposed law.

The proposed legislation was widely criticised following its introduction to the upper legislative chamber two weeks ago.

While leading the debate on the bill, Musa said the proposed law is not an attempt to stifle free speech, but an attempt to check the growing threats which if left unchecked, can cause “serious damage” in society.

“While the internet has democratised information, the fact remains that it has also been a weapon in the process which is why governments across the world trying to mitigate the risks associated with information transmission via internet by monitoring abuse and deliberate misconduct,” he said.

“One of the disadvantages of the internet is the spread of falsehood and manipulation of unsuspecting users.”

The lawmaker said the “hoax” of the demise of President Muhammadu Buhari in London and his purported replacement by one Jibril of Sudan “are things that threaten the peace, security and harmony of our people”.

“Penalty for defaulters goes up to N300,000 for individuals and up to N10 million for corporate organisations and imprisonment of up to three years or both,” he said.

“I not only opposed to this bill, I condemn it in its entirety. Based on our constitution, there is freedom of information and freedom of speech,” he said.

“There is a cybercrime act that deals with this issue. There are also laws that deals with false information, libel, slander and so on. Yes, fake news has done a lot in America and other countries but they have not brought any law to deal with it.”

However, the bill passed second reading after it was put to a voice vote by Senate President Ahmad Lawan.

The bill was referred to the committee on judiciary to report back in four weeks.

TWITTER @thecableng
Copyright 2020 TheCable. All rights reserved. This material, and other digital content on this website, may not be reproduced, published, broadcast, rewritten or redistributed in whole or in part without prior express written permission from TheCable.
Tags
anti-social media billsenate
Advertisement