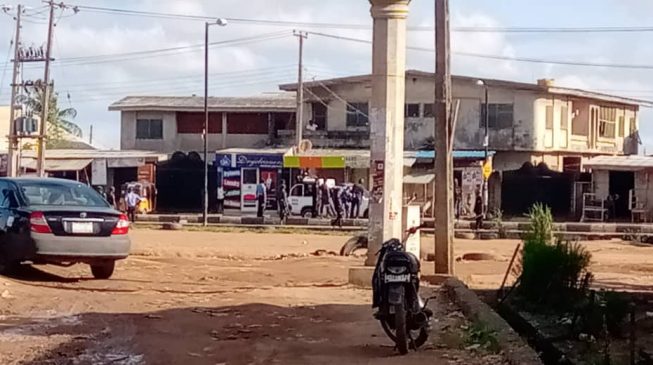 16:56 2019
Print This Article Share it With Friends
👤by Adedayo Ade-Rufus  1 Comment
Advertisement

Some soldiers are currently at Jakande in Ijegun, Isolo local government area of Lagos state, over the detention of two policemen.

Angry youth had taken the officers to the palace of the traditional ruler in the area after a female trader was killed by a bullet reportedly fired by the security operatives who were chasing some suspected internet fraudsters, better known as “Yahoo boys”.

A witness told TheCable that the trader was pronounced dead at the hospital she was taken to after the incident.

The operatives reportedly fled after learning of the incident but youth in the community held two of them.

Some of the policemen who escaped later returned with soldiers.

As the youth, who lit bonfires in front of the palace where the officers were being detained, sighted them, they started pelting the security operatives with stones and bottles but they fired into the air to disperse the aggrieved youth.

The soldiers and some policemen have moved into the palace of the traditional ruler. After some minutes, the soldiers left the community while policemen remained in the palace and strategic locations in Ijegun.

TWITTER @thecableng
Copyright 2020 TheCable. All rights reserved. This material, and other digital content on this website, may not be reproduced, published, broadcast, rewritten or redistributed in whole or in part without prior express written permission from TheCable.
Tags
IjegunSARSsoldiers
Advertisement