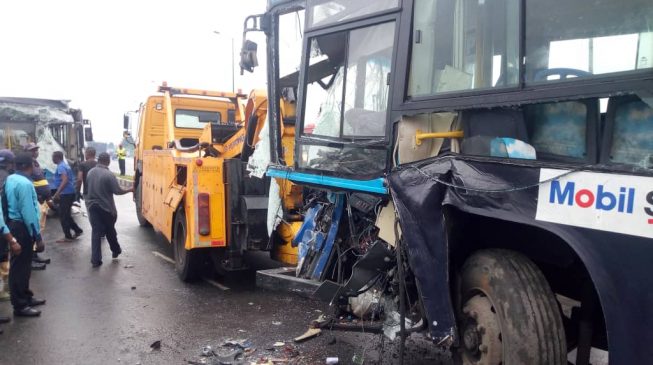 19:43 2019
Print This Article Share it With Friends
👤by Jamilah Nasir  1 Comment
Advertisement

Many people were left injured after two BRT buses collided in Ikorodu area of the state on Monday.

Fola Tinubu, the managing director of the company, explained that the buses were trying to avoid hitting a motorcyclist plying the lane meant for BRT buses when the accident occurred.

He called on the government to take drastic actions in curbing motorcyclists from plying BRT lanes else to avoid a repeat of the incident.

Tinubu said that all those who sustained injuries in the accident have been treated and discharged from the hospital.

“The buses trying to evade an Okada and that was when they collided with each other.

“There were some minor injuries and all the affected have been released from the hospital and everyone of them spoke out. We thank God for that.

“However, my big concern is this Okada menace. The way they ride is as if they have more than one life. Their weirding between buses needs to be addressed.

“The government just has to do something urgently about Okada on BRT lanes.”

The collision happened less than a week after a truck collided with a BRT bus, killing one and injuring many in Ikorodu.

In May, one of the vehicles used for BRT service caught fire on the third mainland bridge.

TWITTER @thecableng
Copyright 2020 TheCable. All rights reserved. This material, and other digital content on this website, may not be reproduced, published, broadcast, rewritten or redistributed in whole or in part without prior express written permission from TheCable.
Tags
accidentBRTOkada
Advertisement